President Biden laid out an ambitious agenda on Wednesday night to rewrite the American social compact by vastly expanding family leave, child care, health care, preschool and college education for millions of people to be financed with increased taxes on the wealthiest earners.

Invoking the legacy of Franklin D. Roosevelt, Mr. Biden unveiled a $1.8 trillion social spending plan to accompany previous proposals to build roads and bridges, expand other social programs and combat climate change, representing a fundamental reorientation of the role of government not seen since the days of Lyndon B. Johnson’s Great Society and Roosevelt’s New Deal.

“We have to prove democracy still works, that our government still works and we can deliver for our people,” Mr. Biden said in his first nationally televised address to a joint session of Congress.

Taken together, the collection of initiatives that Mr. Biden has introduced in his first 100 days in office suggest a breathtaking scope of change sought by a 78-year-old president who spent a lifetime as a more conventional lawmaker. After presenting himself during last year’s campaign as a “transition candidate” to follow the volatile tenure of Donald J. Trump, Mr. Biden has since his inauguration positioned himself as a transformational president.

But the succession of costly proposals amounts to a risky gamble that a country deeply polarized along ideological and cultural lines is ready for a more activist government and the sort of redistribution of wealth long sought by progressives. Mr. Biden’s Democrats have only the barest of majorities in the House and Senate to push through the most sweeping of legislation and, successful or not, he may have framed the terms of the debate for the next election.

“Our best future will not come from Washington schemes or socialist dreams,” Senator Tim Scott, Republican of South Carolina, said in his party’s televised official response. “It will come from you — the American people.”

For Mr. Biden, who watched such speeches as a senator or vice president for nearly a half-century, it was the first time behind the microphone setting the agenda for what was the functional equivalent of a State of the Union address. “It’s good to be back,” he said as he greeted lawmakers.

But coming in the latter days of the coronavirus pandemic and less than four months after a mob of Trump supporters stormed the Capitol, the event was unlike any other presidential speech as Mr. Biden faced a half-empty chamber. 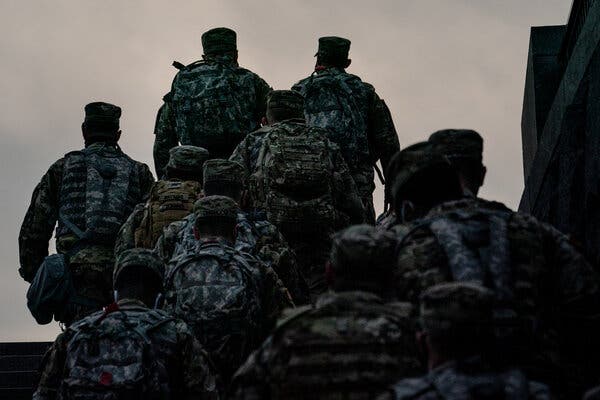 National Guard troops patrolling outside the Capitol before Mr. Biden’s speech. Extra security has remained there since a mob of Trump supporters stormed the building in January.Credit…Erin Schaff/The New York Times

On the advice of the Capitol physician, only 200 members of Congress and other officials were invited instead of the usual 1,600, all wearing masks in assigned seats at least six feet apart. The president, who fist-bumped his way down the aisle, arrived amid tighter security than usual, with streets around the building closed and patrolled by swarms of police officers and National Guard troops.

The cabinet was represented by just two members, Secretary of State Antony J. Blinken and Defense Secretary Lloyd J. Austin III, while Chief Justice John G. Roberts Jr. stood in for the entire Supreme Court and Gen. Mark A. Milley, the chairman of the Joint Chiefs of Staff, for the rest of the military hierarchy.

Not allowed to bring anyone to the first lady’s box, Jill Biden hosted five guests online beforehand, including a transgender teenager, a gun control activist and an immigrant brought to the country illegally as a child.

But in a notable first, Mr. Biden became the first president to deliver an address to Congress with two women sitting behind him representing the next in the line of succession to his office, Vice President Kamala Harris and Speaker Nancy Pelosi. After addressing Ms. Harris as “Madam Vice President,” Mr. Biden said to applause, “No president has ever said those words, and it’s about time.”

Vice President Kamala Harris and Speaker Nancy Pelosi were the first two women to sit behind a president during an address to Congress, representing the line of succession.Credit…Erin Schaff/The New York Times

The smaller audience produced a more intimate feeling in the chamber, and unlike previous presidents, who had to project their voices, Mr. Biden at times lowered his to a whisper, as he often does during speeches. He departed from his prepared text and ad-libbed more than most presidents do, and lingered around the chamber afterward to chat with lawmakers.

One thing that did not change were the party-line reactions as members of the president’s party jumped to their feet to cheer his ideas while the opposition remained sitting on their hands with a few notable exceptions.

Mr. Biden struck an optimistic note with the fading of the pandemic that has killed more than 573,000 people in this country, hailing the progress in vaccinating most American adults and the easing of public health restrictions that have so warped everyday life for more than a year.

“Now, after just 100 days, I can report to the nation: America is on the move again,” the president said. “Turning peril into possibility. Crisis into opportunity. Setbacks into strength. We all know life can knock us down. But in America, we never, ever, ever stay down.”

The gathering came at a moment of racial turmoil after last week’s conviction of a former Minneapolis police officer in the murder of George Floyd and after a spate of subsequent shootings involving law enforcement agents around the country. And it came at a time of multiple mass shootings that have once again put gun laws into question.

Mr. Biden called for legislation to improve policing around the country and to restrict access to high-powered firearms. He expressed hope that negotiations to rein in police abuses may reach bipartisan agreement and called on lawmakers to come to a deal by next month, one year after Mr. Floyd’s death, but no consensus across the aisle appears likely for meaningful gun legislation.

“The vast majority of those wearing the badge serve our communities honorably,” Mr. Biden said, drawing bipartisan applause. But he added, “We have to come together to rebuild trust between law enforcement and the people they serve, to root out systemic racism in our criminal justice system and enact police reform in George Floyd’s name.”

Mr. Biden also came to the defense of transgender people who have been targeted by some Republicans. “For all transgender Americans watching at home, especially young people who are so brave, I want you to know that your president has your back,” he said.

The president, who has struggled to respond to a surge of migrants at the southwestern border since taking office, promoted his proposed overhaul of the immigration system, and talked about his goals to stem climate change by cutting carbon emissions in half over the next decade.

While Mr. Biden promoted his decision to pull all troops out of Afghanistan by Sept. 11 after nearly 20 years of war there, he said little new about how he would address challenges from increasingly antagonistic adversaries like China, Russia, Iran and North Korea other than repeating his intent to take a tough line when necessary while seeking cooperation where possible.

But as striking as anything else in the speech was Mr. Biden’s vision of a profound pivot in America’s eternal debate about the role of government in society. Four decades after President Ronald Reagan declared that government was the problem, not the solution, Mr. Biden aimed to turn that thesis on its head, seeking to empower the federal state as a catalyst to remake the country and revamp the balance between the richest and the rest.

The “American Families Plan,” as he called his latest, $1.8 trillion proposal, would follow the “American Rescue Plan,” a $1.9 trillion package of spending on pandemic relief and economic stimulus that he has already signed into law, and the “American Jobs Plan,” a $2.3 trillion program for infrastructure, home health care and other priorities that remains pending.

The families plan includes $1 trillion in new spending and $800 billion in tax credits. It would finance universal prekindergarten for all 3- and 4-year-olds, a federal paid family and medical leave program, efforts to make child care more affordable, free community college for all, aid for students at colleges that historically serve nonwhite communities and expanded subsidies under the Affordable Care Act.

The plan would also extend key tax breaks included as temporary measures in the coronavirus relief package that benefit lower- and middle-income workers and families, including the child tax credit, the earned-income tax credit, and the child and dependent care tax credit.

To pay for that, the president proposed increasing the marginal income tax rate for the top 1 percent of American income earners, to 39.6 percent from 37 percent. He also would increase capital gains and dividend tax rates for those earning more than $1 million a year. And he would eliminate a provision in the tax code that reduces capital gains on some inherited assets, like vacation homes, that largely benefits the wealthy.

Republicans on Wednesday did not wait for the speech to be delivered to focus on the sticker shock of Mr. Biden’s various plans, eager to unify in their opposition to a Democratic president’s liberal blueprint rather than continue to engage in their own fractious civil war over the role of Mr. Trump in their party.

“Behind President Biden’s familiar face, it’s like the most radical Washington Democrats have been handed the keys, and they’re trying to speed as far left as they can possibly go before American voters ask for their car back,” Senator Mitch McConnell of Kentucky, the Republican leader, said beforehand.

Mr. Romney, one of the more moderate Republicans that Mr. Biden needs if he has any hope of forging bipartisan support, used another metaphor. “Maybe if he were younger, I’d say his dad needs to take away the credit card,” Mr. Romney told reporters.

Nor did Republicans give the president credit for progress in curbing the pandemic, pointing out that the vaccines were developed under Mr. Trump and that the economy was already on the rebound by the time Mr. Biden took office. “This administration inherited a tide that had already turned,” Mr. Scott said. “The coronavirus is on the run.”

But as aggressive as Mr. Biden’s programs were, he faced pressure from the left to go further. Some liberals, for instance, were disappointed that he did not do more to expand health care and pulled out of the families plan a proposal to authorize Medicare to negotiate prescription drug prices amid industry opposition. In the speech, he promised to pursue such a policy and called for separate legislation to be passed by the end of the year.

In making his pitch for a more expansive government, Mr. Biden tied his plans to the Jan. 6 attack on the Capitol, suggesting that the American system itself was being tested.

The world’s autocrats, he said, were betting that it could not. “They look at the images of the mob that assaulted the Capitol as proof that the sun is setting on American democracy,” Mr. Biden said. “But they’re wrong. You know it. I know it. But we have to prove them wrong.”