PARIS — The French police on Wednesday arrested seven former members of Italian left-wing extremist groups who had been convicted of terrorism crimes in Italy decades ago, but were given refuge in France.

A court will now decide if the militants, arrested at the request of the Italian authorities, can be extradited to Italy, a decision that could take several years depending on appeals.

Dozens of Italian leftist extremists were given refuge in France decades ago by the socialist government at the time if they agreed to renounce violence, a move that long poisoned the diplomatic relationship between France and Italy.

The government’s announcement of the arrests on Wednesday signaled an easing of that troubled relationship, with Prime Minister Mario Draghi of Italy and President Emmanuel Macron of France managing to establish closer ties in recent months.

“France, also hit by terrorism, understands the need for justice for the victims,” a statement from Mr. Macron’s office said, adding that the arrests followed “important bilateral work.”

The statement said that the Italian government had initially put forward the names of 200 individuals but that French prosecutors decided to focus on those convicted of “the more serious crimes,” eventually arresting seven former militants. Another three people were still being sought.

Italy’s government welcomed the French move with “satisfaction,” and said in a statement that those arrested were “responsible for very serious terrorism crimes that left a still open wound.” It added: “The memory of those barbaric acts is still alive in the Italian conscience.”

Among those captured on Wednesday were five former members of the Red Brigades, the paramilitary group that terrorized Italy throughout the 1970s and into the 1980s. As part of a campaign to foment a leftist revolution, the group carried out killings, bank robberies and kidnappings, including the abduction and murder of Aldo Moro, a former prime minister. 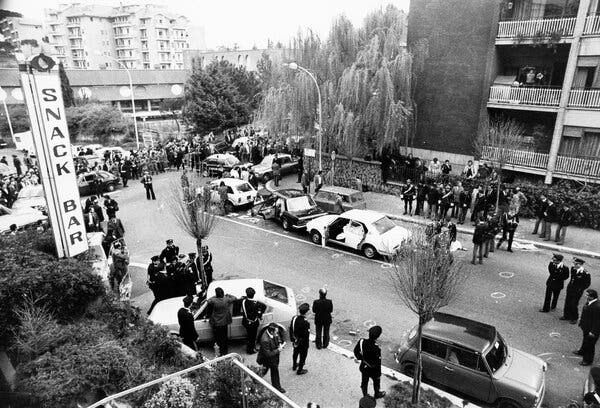 Aldo Moro, a former Italian prime minister, was abducted in Rome on March 16, 1978, by members of the Red Brigades.Credit…Marka/Universal Images Group, via Getty Images

The former Red Brigades militants who were arrested had received various jail sentences, including life in prison for several of them, for taking part in the killings and kidnappings.

Giorgio Pietrostefani, a co-founder of the far-left group Lotta Continua, which translates as “Continuous Struggle,” was also detained in France. Mr. Pietrostefani was sentenced to 22 years in prison for murdering the police chief of Milan, Luigi Calabresi, in 1972.

François Mitterrand, the former socialist president of France, instituted a policy in the 1980s when he was in office of granting asylum to leftist Italian militants — much to the anger of the Italian government, which requested their extradition — providing they renounced violence and were not wanted in Italy for murder or other “crimes of blood.” Some of the militants, like Mr. Pietrostefani, however, had been implicated in such crimes.

One of the beneficiaries of the so-called Mitterrand Doctrine who was arrested on Wednesday was Marina Petrella, a former Red Brigades member who fled to France in 1993 after being convicted of involvement in several murders.

In 2008, President Nicolas Sarkozy rejected a request from the Italian government to extradite Ms. Petrella, citing humanitarian reasons as her health was deteriorating. The refusal provoked outrage in Italy and revived dormant tensions between the two countries.

The French presidency said in its statement Wednesday that the arrests “fall strictly within the framework of the Mitterrand doctrine, since they are blood crimes.”

In 2019, Matteo Salvini, Italy’s interior minister at the time, said that he would “appeal to the French president to return to Italy some fugitives who do not deserve to drink champagne under the Eiffel Tower, but deserve to rot in jail in Italy.”

In his few months in office, Mr. Draghi has quickly formed a strategic alliance with Mr. Macron at the European level and Wednesday’s decision testified to this new working relationship.

Marta Cartabia, Italy’s justice minister, said she met with her French counterpart, Éric Dupond-Moretti, and that he had shown a “particular sensitivity” to the case and “decisive will to cooperate.”

Mr. Dupond-Moretti said he hoped the arrests “will allow Italy to turn a bloody and tearful page of its history after 40 years.”

Benedetta Tobagi, an Italian journalist and daughter of Walter Tobagi, a reporter who was killed in 1980 by a left-wing terrorist brigade, welcomed the decision in an editorial in the Italian daily La Repubblica on Wednesday.

But she added, “the anomaly is not the arrests, but the unreasonable persistence of the Mitterrand doctrine, the fact that it took so many years, and so much effort, to unblock the situation.”