Throughout April, virus cases, hospitalizations and deaths have all been declining, which epidemiologists attribute to the climbing rate of vaccination as well as the arrival of warm weather, drawing people outdoors.

From a second-wave peak of nearly 8,000 cases in a single day in January, New York City is now averaging about 2,000 virus cases per day. Public health officials say that by July, if the city stays on its current trajectory, that number could drop to below 600 cases a day, perhaps lower.

But they also warn that uneven vaccination coverage could lead to a situation where the virus persists in some corners of the city, but not others. Manhattan, the borough with the highest median household income, is far more vaccinated than the Bronx, the poorest, reflecting vaccine hesitancy in some parts of the city and underscoring the longstanding inequalities in health care that the virus has laid bare.

And there are signs that the pace of vaccinations is slowing. So far 52 percent of adults across the city have received at least one dose.

“We can’t mistake progress for victory, and these next two months in particular are critical ones with respect to our vaccination campaign and with our goals of reaching every single New Yorker that we can,” said Dr. Chokshi in an interview Tuesday. “We are going to redouble our efforts with respect to thinking about access and further ensuring that the vaccine is accessible as possible.”

The second wave in New York has not been as severe as the devastating first wave that hit the city in March and April 2020. But epidemiologists and public health officials are surprised at how long it has lasted.

Since this wave started last fall, nearly 50,000 New Yorkers have been hospitalized with Covid-19. It peaked around early January, with nearly 6,500 cases a day on average during the worst week. New infections then began dropping, but leveled off at a high plateau of nearly 4,000 new cases a day throughout March.

The case count was flat, but the epidemic was in flux. Vaccines had arrived, and the number of vaccinations was soaring to tens of thousands each day. But even as more people gained protection, the virus was becoming more transmissible. Two new variants were quickly replacing other forms of the coronavirus. Both were significantly more contagious than the virus of last year. 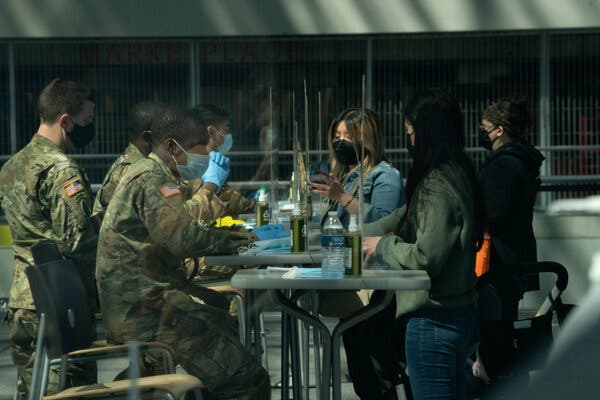 In March, New Yorkers flocked to the Javits Center in Manhattan to be vaccinated.Credit…James Estrin/The New York Times

Public health experts spoke of a tug of war between the variants and the vaccination campaign. For a time, there was a stalemate. In late March, it seemed the variants were gaining slightly, and new daily cases appeared to briefly rise. Then new case counts began falling at the start of April, tumbling from nearly 4,000 cases a day at the start of the month to about 2,000 a day in late April. The seven-day positive test rate has fallen too and is now between 3 and 4 percent, according to the city’s data, the lowest it has been since the fall — but still a lot higher than its low of 1 percent last summer.

More than 1,500 Covid-19 patients remain hospitalized in New York City, and the death toll on some days is still around 40.

Epidemiologists and city officials warn that the epidemic is not close to over in New York, even though there are promising signs.

Hospitalizations have dropped faster for people over 65 — a group prioritized for vaccinations early on — than for other groups. But while some neighborhoods now have positivity rates of under 1 percent, in others that rate is six or seven times higher.

“I feel good that we are beginning to see a vaccine effect on transmission here,” said Dr. Denis Nash, an epidemiologist at the City University of New York’s School of Public Health. “But we still have a long way to go, and there are so many New Yorkers and so many neighborhoods that are more affected by this pandemic that are being left behind.”

Where are people still getting sick?

ZIP codes in Flushing, Queens, and on the southern tip of Staten Island had the highest test positivity rates early this week, both above 7 percent, more than twice the citywide average, according to city data.

There are other hot spots elsewhere in Queens, Southern Brooklyn and Staten Island. But in a positive sign, transmission appears to have dropped in the Bronx, the only borough in which no ZIP code has a positivity rate over 5 percent.

The virus, however, remains a significant threat in corners of the city like Sunset Park, Brooklyn, a largely immigrant neighborhood where most people are Latino or Asian. There, in one ZIP code, the positivity rate still remains 6 percent. Over the last month, 103 people in this ZIP code were hospitalized and 22 died.

But in New York City, so far, it seems that the combination of prior immunity from infection and immunity from the vaccine has staved off the worst-case scenario of a huge spike in cases because of the variants, such as the one that struck Britain after the winter holidays. Cases in the city are now declining even as the proportion of cases that are the variants rises. That is encouraging news for epidemiologists.

In New York City, so far, it seems that the combination of prior immunity from infection and immunity from the vaccine has staved off the worst-case scenario.Credit…Stephanie Keith for The New York Times

There has also been positive news from laboratory studies showing that the two main vaccines being used here, Pfizer and Moderna, are effective against the New York variant, which is responsible for about 40 percent of new cases.

“There are many pieces of the puzzle that all seem to be encouraging at this point in time,” said Wafaa El-Sadr, an epidemiologist at the Columbia Mailman School of Public Health.

A dip in vaccinations

Last summer, in the months following the first wave, the daily case count got to below 300 on average. Dr. Chokshi said that he anticipated case counts dropping below 550 a day — a threshold the city set as a goal last year — by July.

İlginizi Çekebilir;  Navalny’s Group Is Shutting all Its Offices in Russia

To get there however, public health officials say they must raise vaccination rates across the city. Pockets with low vaccination rates, they say, could enable localized outbreaks, similar to those that the city saw in 2019 with measles. For that reason, the slow, person-by-person efforts to get people vaccinated must take center stage.

Tomas Ramos, the founder of the Bronx Rising Initiative, which has been organizing pop-up vaccine clinics in low-income areas of the Bronx, said that skepticism about the safety of vaccines, already a hurdle, rose considerably after the federal pause for the Johnson & Johnson vaccine on April 13, with people canceling appointments even for other brands of shots.

In the days following the pause, as a result of six serious cases of blood clotting nationally, only 80 of about 250 people scheduled to receive a dose of the Moderna vaccine at his clinic showed up. “We are very microfocused on this population that doesn’t trust the government and doesn’t trust the vaccine,” he said. “So this is hurting us a lot.”

In the Bronx, fewer than a quarter of residents between the ages of 18 and 34 have received at least one dose. In Manhattan, roughly half of that age group has had at least one shot.

“There is no real population level immunity unless it is broadly covering all groups of people regardless of where they live,” Dr. Jay Varma, a mayoral adviser on public health, said. “The next big battle is trying to reach as many populations that have been hesitant or reluctant as possible.”

He noted the possibility of localized outbreaks that would fall hardest on Black and Hispanic New Yorkers — who fell sick at higher rates during the disastrous first wave last year.

“Will there be pockets where people are very well protected and others where people remain less protected?” he asked. “That’s what we need to be focusing on.”