TOKYO — Athletes will be tested daily, but they will not need to quarantine. Visitors will be asked to stay off public transit. And members of the news media, along with other officials, will be urged to eat takeout meals alone.

Hoping to assuage a Japanese public jittery about the possibility that the rescheduled Tokyo Olympics could turn into a coronavirus superspreader event, organizers of the Games released a second round of so-called playbooks on Wednesday, with updated protocols for those taking part in the world’s largest sporting event this July.

Even without overseas spectators, whom organizers barred from the Games last month, tens of thousands of people will enter Japan this summer after nearly a year in which the country’s borders have been mostly closed to nonresidents. In several public polls in Japan, a majority said they would prefer the Olympics be postponed again or canceled altogether, and some public health experts have questioned whether the Games are safe to stage under current pandemic conditions.

The new rules were unveiled after a meeting between leaders of the International Olympic Committee, the International Paralympic Committee, the Tokyo organizers, Tokyo’s metropolitan government and the government of Japan. Thomas Bach, the I.O.C. president, said the revised protocols were “based on the best scientific and medical expertise” and the experience of hundreds of sports events over the last year, involving thousands of athletes.

Together with the Tokyo organizing committee, Mr. Bach said, the I.O.C. was ready “to take all the necessary measures to minimize risk to make the Japanese people feel safe,” including a commitment to “strictly enforce the compliance with these playbooks.”

“If the situation should require it,” Mr. Bach added, “we are also ready to take even stricter measures together.” 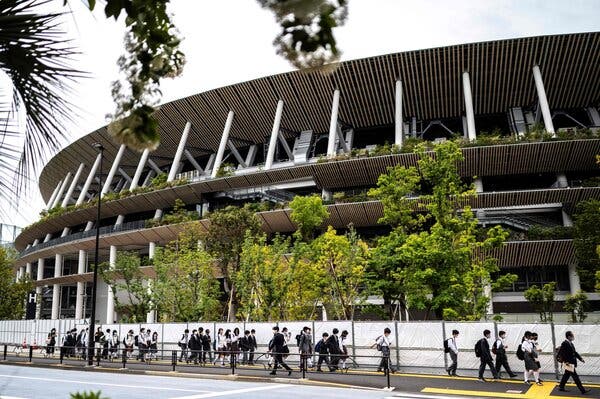 The National Stadium, the main Tokyo 2020 Olympics venue. Some public health experts have questioned whether the Games are safe to stage.Credit…Charly Triballeau/Agence France-Presse — Getty Images

The organizers did not answer the question that many in Japan want addressed: Will domestic spectators will be allowed into Olympic stadiums and arenas? They deferred a decision on that until June.

“As we look into the evolving situation with the domestic infections status involving new strains, we have agreed that a decision regarding spectator capacity at the Olympic and Paralympic venues will be made in June,” the organizers said in a statement.

Seiko Hashimoto, the president of the Tokyo organizing committee, said organizers were prepared “to have the Games with no spectators,” but said, “On the other hand, we have hope that we want as many spectators as possible to see the Games if the situation so allows.”

She added: “The objective is always a full stadium, but in view of the Covid measures in place, we must not obstruct the delivery of medical services.”

Organizers have not mandated that Olympians be vaccinated. Many in Japan have been concerned about the safety of an event that will feature thousands of people from more than 200 countries at different stages of the pandemic. The vaccine rollout has been slow in Japan, where only about 1 percent of the public has been inoculated, and the medical system has recently come under strain as cases and new variants have spread.

The updated Olympic protocols were released with Tokyo and other large cities in Japan in a state of emergency, with restrictions on indoor dining and spectators barred from sporting events.

This week, Japan passed the threshold of 10,000 deaths related to the virus. While that count is relatively low compared with the United States or Europe, it has doubled in only three months.

Tokyo and other large cities in Japan are currently in a state of emergency.Credit…Carl Court/Getty Images

And with the pandemic raging out of control in places like India, Japan is also seeing increases in cases of the double variant that is vexing epidemiologists in other countries.

According to Japanese government statistics, the number of double variant cases detected in Japan quadrupled in four days, to 21 on April 26, from only five on April 22. All but one case was confirmed by testing of passengers landing at airports in Japan.

Ms. Hashimoto acknowledged reservations among some in the Japanese public. “There are so many people who are looking forward to the Summer Games,” she said. “On the other hand, there are people who are worried and anxious about the hosting of the Games. Both sides are true, and we have to face up to both sides.”

Toshiro Muto, the organizing committee’s chief executive, said postponing the Games again was unlikely. With the Beijing Winter Olympics scheduled for 2022 and the Paris Summer Games set for 2024, he said it would be difficult to find another window.

“It is not something that can be done that casually,” Mr. Muto said. Already, he said, athletes had struggled to maintain their fitness and motivation after the one-year postponement. Extending for another year, he said, was “probably not practical.”

Mr. Muto said that private contracts with developers who have sold condominiums in the Olympic Village would also be difficult to extend. “Another round of postponement would mean that we would be imposing inconveniences on private-sector contracts,” he said.

Organizers say they will try to ensure the safety of the Olympics with such measures as daily testing of athletes and asking that all participants, including coaches, officials and members of the news media, avoid public transit. They also increased the number of tests required before arrival in Japan — from one negative test within 72 hours of departure to two within 96 hours.

Nonathletes attending the Games, such as coaches, officials, and others, will be tested daily for three days after arrival and then “regularly,” depending on their roles and how closely they are in contact with competitors. They are also being asked to minimize contact with Japanese residents.

Most Olympic delegations are trying to trim the number of those traveling to Tokyo. Christophe Dubi, executive director of the Olympic Games for the I.O.C., said the Japanese government had asked all participating groups to “minimize the number of people entering Japan, and we respect that.”

A Paralympic swimming test event in Tokyo on Monday. Organizers have not mandated that Olympians be vaccinated.Credit…Philip Fong/Agence France-Presse — Getty Images

Mr. Muto, the organizing committee’s chief executive, said participants would be asked to sign a pledge, and that if they did not comply with the playbook protocols, “there will be a certain level of penalty” including, in the most severe cases, withdrawal of Olympic credentials.

Mr. Muto said that even if athletes or other participants have been vaccinated before arriving in Tokyo, they would be expected to adhere to the playbook rules.

Critics say organizers are more interested in scoring political points or satisfying sponsors and broadcasters than protecting the public.

“I think all of the establishment in Japan are colluding,” said Kaori Hayashi, a professor of media studies at the University of Tokyo. Ms. Hayashi said she was concerned that the Japanese news media had not asked enough tough questions about why the Olympics is going forward at a time when the pandemic is not contained and the vaccine rollout in Japan is particularly slow.

“We have been getting many reports about the next wave and the next, next wave, and as I see the slow progress of the vaccine rollout, we cannot really expect that everybody would be vaccinated by the Summer Olympic Games,” she said. “I cannot really see the point of holding the Games now.”