MADRID — In the winter of 2015, three directors of a Connecticut electric company met with a potential acquirer: a determined Spanish utility executive named José Ignacio Sánchez Galán, who surprised them with a bold vision for America’s utility industry.

“He was very clear then that he saw the U.S. as having enormous potential in renewable energy,” said John L. Lahey, who was chairman of the company, United Illuminating. “This guy six years ago was already way ahead of where the U.S. was.”

Mr. Galán clinched that deal for United Illuminating for $3 billion. His company, Iberdrola, is now poised, with a Danish partner, to begin constructing the first large-scale offshore wind farm in the United States, in waters off Massachusetts. Over all, Iberdrola and its subsidiaries reach 24 U.S. states and have investments in countries from Britain to Brazil to Australia.

For the past 20 years, since he took over Iberdrola, based in Bilbao with 37,000 employees, Mr. Galán has been on a mission to upend the electrical utility industry, a fragmented collection of companies tied to aging coal- and oil-burning generators.

With a voracious appetite for acquiring utilities and making big investments in renewable energy, Iberdrola is now the world leader in combined wind and solar power outside China, according to Bernstein, a market research firm.

And it looks well positioned to take advantage of what is likely to be a clean energy boom in the coming years as both the Biden administration in the United States and European countries tighten regulations and provide incentives to encourage investment in green energy.

“Galán without doubt was the chief executive of a big utility that first understood that the energy transition from fossil fuels to clean energy was unavoidable and that it would happen fast,” said Miguel Arias Cañete, a Spanish politician and former European commissioner for energy and climate action.

The changes at Iberdrola are happening elsewhere, as the electric power industry is being reconfigured not only by tougher environmental laws but also by the advantages of immense scale in buying wind turbines or solar panels.

Iberdrola is now one of a handful of utilities — alongside Enel in Italy, Orsted in Denmark and Nextera Energy in the United States — that many analysts see as leaders of a new generation of “renewable majors,” comparable to the way oil majors like Exxon Mobil and Royal Dutch Shell exercised huge influence on how the world used energy. 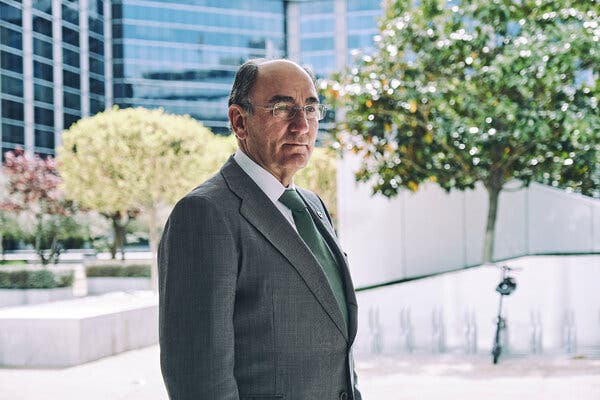 José Ignacio Sánchez Galan, chairman and chief executive of Iberdrola, said he saw the Kyoto Protocol “as an opportunity.”Credit…Gianfranco Tripodo for The New York Times

“This is all pointing to an industry where you have a relatively small number of very large players, who achieve scale in renewables and drive the costs ever lower,” said Sam Arie, an analyst at UBS in London.

Many industrial giants vowed to fight laws to tighten emissions, but Mr. Galán was inspired. He said in an interview that he saw the agreement as an opening for businesses prepared to invest in technologies like wind and solar power that would help reduce greenhouse gas emissions.

“Instead of being a problem I saw that as an opportunity,” Mr. Galán said. The geopolitical trends represented by Kyoto were “moving in my direction.”

Under a 12 billion euro restructuring plan that was considered radical at the time, Iberdrola sold much of its portfolio of emissions-spewing coal and oil-fired power plants to invest instead in renewables, as well as in networks for delivering electricity.

Mr. Galán concedes that his proposals seemed risky, given that they coincided with the spectacular collapse of Enron, another ambitious electric power business.

But he pushed to expand, especially overseas. He recalled being drawn to invest in the United States when, during a visit, he took notice of all the wooden poles carrying power lines. If a country of such great technological prowess still needed wooden poles to transport its electricity, he figured, there was a lot of room for a company like Iberdrola.

“He transformed the company from being a follower to being the leader not only in electricity but in energy in general,” said Óscar Fanjul, a former chairman of Repsol, the Spanish energy company.

İlginizi Çekebilir;  15 New Books to Watch For in May
A worker at the Romeral solar power plant, one of the newest Iberdrola power complexes, in the province of Cuenca in east-central Spain.Credit…Gianfranco Tripodo for The New York Times

Mr. Galán is now planning to roughly double Iberdrola’s capacity for generating clean energy over the next five years, by investing €35 billion more not only in wind and solar power, but also in emerging sectors like hydrogen, which the company says could be ready to take off as wind power was 20 years ago.

Almost 80 percent of planned investments are outside its home market, according to Iberdrola, which reported net profit of €3.5 billion on revenues of €36.4 billion in 2020.

Generating electricity is only part of Iberdrola’s business. It also builds and manages electric power networks, and this area, too, is expected to see a surge of investment. Electricity is becoming central to cars and trucks as well as home heating, so the grid systems necessary for delivering the electrons to homes will require major upgrades.

The field is likely to become more competitive as oil giants, especially in Europe, pour billions of dollars into renewables to help reduce the overall carbon content of their products. In February, major oil companies entered the bidding for options to build wind farms off the British coast, and the prices paid were criticized by some operators as too high.

In the interview, Mr. Galán shrugged off any competitive threat from Big Oil as confirmation of what Iberdrola had been doing for decades.

“I am delighted that they are already using a photocopy” of the strategy that Iberdrola printed 20 years ago, he said.

Analysts say there is a lot of work to do to reach climate goals, enough for both Iberdrola and its rivals to thrive. “The market is growing very fast, and there is enough room,” said Meike Becker, an analyst at Bernstein in London. Besides, Ms. Becker said, Iberdrola is ordering so many wind turbines and solar panels that its size can give it a nearly 20 percent cost edge over smaller rivals.

These days, Mr. Galán’s position atop Iberdrola seems as strong as ever. Iberdrola’s share price has tripled since he took charge, although his acquisitions have also contributed to a hefty debt pile of over €35 billion — about half of Iberdrola’s market value.

He has fended off boardroom challenges, such as one posed by another prominent Spanish executive, Florentino Pérez, the president of the Real Madrid soccer club. Mr. Pérez’s construction company, ACS, acquired a 10 percent stake of Iberdrola in 2006, a move initially welcomed by Iberdrola as a possible Spanish ally against a takeover bid. But the relationship soured when ACS tried to increase its seats on the board. ACS eventually divested.

Lately, the company has been entangled in a courtroom scandal involving a former police inspector whose security firm was hired by Iberdrola and many others. Mr. Pérez has joined the case as an individual plaintiff, and his claim that Iberdrola spied on him has reignited his old feud with Mr. Galán. Iberdrola insists it has done nothing wrong.

But for an executive known for making bold bets on the future, Mr. Galán, who is 70, has yet to announce any transition plans. He remains in firm control as both chairman and chief executive, and says he has no interest in retiring, once describing himself as “the dean of all chief executives of Europe.”

Some analysts say privately that he ought to be grooming a successor. His son and son-in-law are both managers at the company but are not seen as ready to step into the executive suite, and his second-in-command is 64.

“I think I have to continue just growing and conducting this company,” he said.

Iberdrola’s East Anglia One wind turbine project, off the coast of Britain. Credit…Suzie Howell for The New York Times

Stanley Reed reported from London, and Raphael Minder from Madrid.