What is it with male politicians and their hair these days? After decades — centuries — of nondescript short cuts, their crowning glory has suddenly turned into a form of creative expression. And source of controversy.

It often seemed as if no one could top Donald Trump’s incredibly complicated cream puff of a construction — until Boris Johnson, with his signature flyaway platinum locks (the ones that he uses to distract, amuse, disarm and otherwise manipulate those around him), arrived at 10 Downing Street as Britain’s prime minister.

But then, earlier this week in an ITV television interview, a former prime minister one-upped them both.

Or rather Tony Blair’s long, flowing gray hair did. There hasn’t been a former member of the league of NATO nations who let it all down like that since President Lyndon Baines Johnson.

Though Mr. Blair was on camera to discuss devolution and the possibility of another Scottish independence referendum, it was clear almost immediately that his evolution from chipper reform-minded P.M. with slightly spiky New Labour/Cool Britannia-era hair to Samson-like figure was making most of the news. Comparisons on social media ranged from Dr. Who to “the possessed Vigo painting in Ghostbusters.” 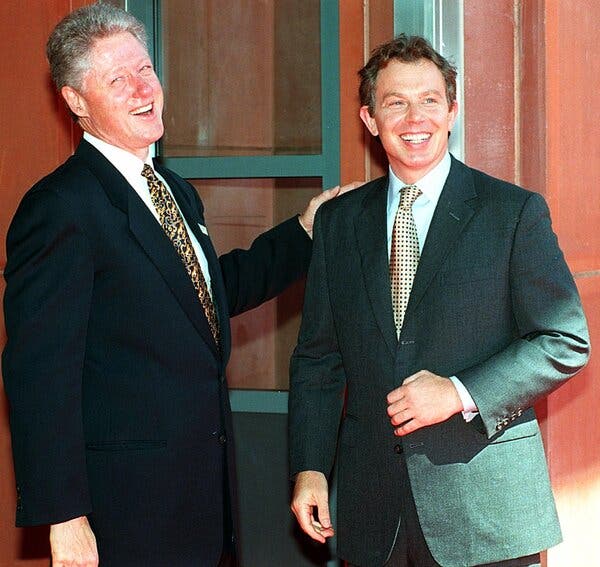 Mr. Blair had a New Labour/Cool Britannia look in 1997 when, as Britain’s prime minister, he met with President Bill Clinton in Denver.Credit…Doug Collier/Agence France-Presse — Getty Images

On the one hand, the hair should not have been surprising. Everyone, after all, has spent the last year having to do home hair care, as Covid protocols meant salons were closed and grooming routines interrupted. Many people discovered their natural hair colors for the first time in years, as well as the joy of the ponytail. So Mr. Blair’s hair got long — so did all of ours. Former P. M.s: They’re just like us!

On the other hand, however, it’s not as if Mr. Blair would have lacked access to home hair-care tools. Unlike many, he did not choose to grow a pandemic beard, so some trimming was going on. And his wife Cherie, or their grown children, could probably have helped with a cut or two.

Also, salons reopened in Britain on April 12. Which suggests that Mr. Blair was enjoying his experimentation with hirsuteness — at least until the judgment of the watching world rained down.

And therein lies the lesson.

Mr. Blair’s hair was a shock, in part, because we are simply not used to seeing long hair on male world leaders, former or not. (When it comes to female leaders and hair, as with female leaders and dress, the rules are different.) They are supposed to have hair, of course. Famously, no bald man since Dwight D. Eisenhower has won the presidency. Hair = testosterone in the lizard brain — and since he had been a wartime general, D.D.E. was the exception that proved the rule. The balding former Tory party leader, William Hague (remember him?), was roundly mocked for the baseball caps he wore to cover up his shiny pate.

But Mr. Blair’s hair was also a shock because of what it revealed about our own prejudices and expectations, not just about female hair with all its many associations (Medusa, Lady Godiva, the Salem witches), but male hair, too.

For both sexes hair is, as the anthropologist Grant McCracken wrote in his book “Big Hair,” “our court of deliberation, the place where we contemplate who and what we are.”

And what men do we associate with long hair, especially long gray hair? It plays a role in so many cultural traditions that it can be hard to choose.

Long hair is connected to the images of heavy metal rock stars and hippies, for example. And indeed, Mr. Blair told The Evening Standard he had not had such long hair since his days in a rock band known as the Ugly Rumours at Oxford University. Which raises all sorts of questions about his later-in-life desire to relive them.

Beyond that, long hair also evokes the Bible, not to mention Moses (and any other number of Old Testament prophets). Also, it connects to Gandalf the Gray and magicians of his ilk, as well as Albert Einstein and the myth of the mad genius scientist too busy experimenting with electricity to deal with a combover.

Also poets, though their long flowing hair tends to not be gray, at least in the collective imagination.

What we do not associate with long hair: former world leaders.

Indeed, what Mr. Blair’s hair shows as much as anything is the unspoken public assumption that once our leaders leave the highest office in whatever land, they will remain frozen as they were at that moment, preserved in amber and memories just as they were when they steered the ship of state. Even if they were relatively young while at the helm.

İlginizi Çekebilir;  Biden Has Elevated the Job of Science Adviser. Is That What Science Needs?

That way, when they re-emerge as elder statesmen every once in a while to bestow their hard-earned wisdom on the world, their authority is recognizable. Sure, we know they may be getting on with their lives as private citizens, but they aren’t supposed to flaunt it. It makes them seem inconsistent. (Remember the hoo-ha around Hillary Clinton’s first lady hair cuts?) Unreliable.

As Mr. Blair apparently knows. He later told the Standard he was heading to a barber “imminently.”