LONDON— The ethical allegations swirling around Prime Minister Boris Johnson got more serious on Wednesday after Britain’s Electoral Commission announced it would open a formal investigation into whether Mr. Johnson secretly used political donations to refurbish his apartment in Downing Street.

The commission said it found “reasonable grounds to suspect that an offense or offenses may have occurred.” Mr. Johnson is accused of using funds from a Conservative Party donor to supplement the budget for upgrading his official quarters, which are above the offices at 11 Downing Street.

Mr. Johnson insisted he paid for the refurbishment out of his own pocket, but he has not disclosed whether he repaid a donation made to the Conservative Party once the accusations surfaced. He is entitled to £30,000 ($41,600) a year in public funds to decorate his apartment, but apparently concluded that budget was inadequate.

The news of formal investigation raised the political stakes for Mr. Johnson, who has been engaged in an ugly exchange of charges and countercharges with his disaffected former chief adviser, Dominic Cummings. In Parliament on Wednesday, Mr. Johnson seemed uncharacteristically rattled and angry.

Under tough questioning from the leader of the Labour Party, Keir Starmer, Mr. Johnson said, “I have paid for the Downing Street refurbishment personally.” He said he would make more disclosures about the financing if an independent adviser just appointed by the government deemed it necessary.

“I conformed in full with the code of conduct and officials have kept advising me through this whole thing,” Mr. Johnson said.

Mr. Johnson denied news reports that he told aides last fall he would rather let “the bodies pile high in their thousands” than impose a third lockdown. But he acknowledged that he had expressed deep frustration, saying “they were very bitter, very difficult decisions for any prime minister.” 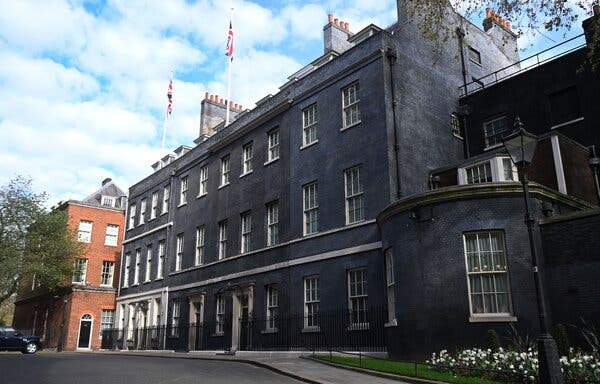 Downing Street in London, the site of the prime minister’s offices and residence.Credit…Andy Rain/EPA, via Shutterstock

The prime minister claimed the Labour Party’s attacks were an effort to deflect attention from the government’s successful rollout of coronavirus vaccines, which he predicted voters would reward in regional elections on May 6.

He defended his contacts with a British billionaire, James Dyson, over his company’s emergency manufacturing of ventilator machines in the early days of the pandemic, noting that Mr. Dyson, whose company is known for making high-end vacuums, said this week that the two men were not close.

Still, the cloud of allegations kept Mr. Johnson on the defensive, with a succession of lawmakers accusing him of deflecting, dissembling or worse.

“Are you a liar, Mr. Prime Minister?” said the parliamentary leader of the Scottish National Party, Ian Blackford, drawing a slap on the wrist from the speaker of the House of Commons, who said the question was “unsavory.”

Mr. Starmer, a former crown prosecutor, tried to pin down Mr. Johnson on specific points regarding the refurbishment, noting that ministers who knowingly utter untrue statements in the House are obliged to resign.

He pressed Mr. Johnson about who paid the initial invoice for the work on the apartment, and asked him to respond to a report that a wealthy Conservative Party donor, David Brownlow, had contributed £58,000 ($80,000), which was used to pay for part of the upgrade.

Mr. Johnson declined to address either point, repeating only that he paid for the refurbishment. He tried to turn the attack back on the opposition, claiming that it was ignoring public health and economic issues that ordinary people care about in favor of frivolous questions about interior decoration.

“He goes on and on about wallpaper, which as I’ve told him umpteen times, ‘I paid for,’” Mr. Johnson said, gesticulating angrily.