Soon it will all be over — the guesses, the hunches, the smoke screens, the informed speculation, the uninformed speculation and, especially, the billions of mock drafts, which have elicited untold page views and paroxysms of internet rage but that as of around 8:15 p.m. Eastern time Thursday will be as relevant as the mock drafts released Friday for 2022.

Projecting how the first round of the N.F.L. draft will unfold is a futile exercise every year, especially this one, after the pandemic battered the 2020 college football season. More than 100 Division I players opted not to play; the traditional scouting combine was canceled; and teams’ efforts to assemble comprehensive profiles on prospects, with limited game film and access to medical information, were compromised.

That absence of information ratchets up the stakes for organizations but not for amateur prognosticators, who have accounted for randomness in their mock drafts but will in all likelihood nail only a few of the 32 first-round picks. According to The Huddle Report, which rates mock drafts after the actual one concludes, only 13 of the 109 forecasts last year got at least 10 first-round picks right.

Still some trends and themes have already emerged in the projections this year. Some might even turn out to be true. Here’s a look at what the forecasters expect to happen — and what divides them.

Quarterbacks will be taken early — lots of them.

Never have five quarterbacks gone in the top 10 — the closest was in 1999, when five went within the first 12 picks — but many forecasters believe that this will be the year. Where opinions diverge is after the first two picks, which are expected to be used for Trevor Lawrence of Clemson (Jacksonville Jaguars) and Zach Wilson of Brigham Young (Jets).

Mac Jones of Alabama is the most popular choice to land with the San Francisco 49ers, who traded up nine spots in March to get the No. 3 pick. Justin Fields of Ohio State has often been projected to land with the Carolina Panthers at No. 8 or with the New England Patriots, who would probably have to move up from No. 15 to take him. Peter King of NBC Sports wrote not to dismiss the Panthers, even though they acquired Sam Darnold in a trade with the Jets this month.

“Owner David Tepper has made no secret that finding a franchise quarterback has to be job one, two, three and four for the team,” King wrote of Carolina. “Fields falling to them makes sense — even if it would crush the new incumbent QB.” 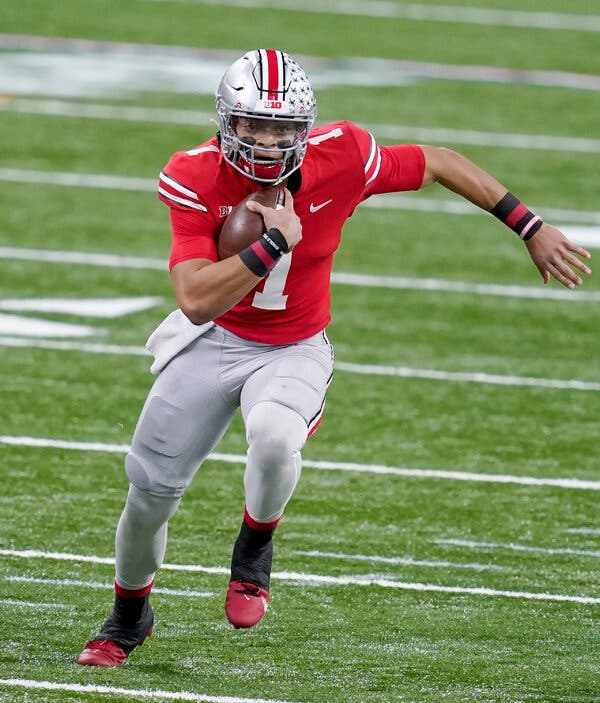 Rounding out the group is Trey Lance of North Dakota State, who has played only once since 2019, in an exhibition against Central Arkansas in October. Potential destinations for him include Atlanta and Denver, which traded for Teddy Bridgewater to compete with Drew Lock but could use a star to match up against Kansas City’s Patrick Mahomes and the Los Angeles Chargers’ Justin Herbert in the A.F.C. West.

“If they’re willing to be patient with Lance, the rewards could be far greater,” Peter Schrager of NFL.com wrote of the Broncos. “No team wants to take the fifth quarterback in a draft. But not all teams have these QBs ordered alike.”

The top 10 is mostly clear.

Beyond the quarterbacks, the players bound to go early are tight end Kyle Pitts of Florida, receiver Ja’Marr Chase of Louisiana State and offensive tackle Penei Sewell of Oregon. No tight end has been drafted in the top five since Denver selected Riley Odoms (you remember him, right?) in 1972, but Pitts very well could break that streak.

Analysts are split on whether the two other elite receivers in the class, DeVonta Smith and Jaylen Waddle of Alabama, will be taken in the top 10, and in which order. Smith, the 2020 Heisman Trophy winner, is forecast to go as high as ninth (to the Miami Dolphins), by Pro Football Focus’s Eric Eager and George Chahrouri, and as low as 16th (to the Arizona Cardinals), by Dane Brugler of The Athletic.

“What a steal if Smith falls this far,” Brugler wrote. “The Cardinals have solid role players behind DeAndre Hopkins on the receiver depth chart, and there are arguably greater team needs, but Arizona can’t pass on Smith and his impact in that offense.”

Waddle seems to have a higher draft ceiling, with King, Schrager and Danny Kelly of The Ringer expecting him to go either sixth or seventh. But Chad Reuter of NFL.com has Waddle landing with New England, at No. 15, to upgrade the Patriots’ passing attack.

“Last month, I projected this pairing, anticipating the departure of Julian Edelman,” Reuter wrote. “Now that Edelman has announced his retirement, Waddle’s placement in the slot — and as a returner — makes even more sense.”

Other possibilities to sneak into the top 10 include offensive tackle Rashawn Slater of Northwestern, linebacker Micah Parsons of Penn State and cornerbacks Patrick Surtain II of Alabama and Jaycee Horn of South Carolina.

When will the first defensive player be drafted?

The consensus among analysts is that the first defensive player will go anywhere from seventh to 12th, with Surtain, the son and namesake of the former Pro Bowl cornerback, as the most likely candidate.

Alabama’s Patrick Surtain II returned an interception for a touchdown against Mississippi State in October. Surtain appears to be the defensive player most likely to be drafted in the top 10.Credit…Gary Cosby Jr/The Tuscaloosa News, via Associated Press

“With the big four pass catchers (Pitts, Chase, Waddle, Smith) all off the board, it makes sense for the Eagles to turn to bolstering their defense,” Kelly wrote, referring to Philadelphia’s No. 12 pick. “Surtain would be a great addition, bringing length, athleticism and natural coverage instincts to Philly’s secondary.”

Many years, including in seven of the last eight, a pass rusher is the first defender drafted. But that position does not appear as valued by forecasters, who expect Kwity Paye of Michigan or Jaelan Phillips of Miami to be taken in the middle of the round.

In the Super Bowl era (since 1967), the latest the first defensive player was drafted was at No. 7 in 1999, when the Broncos took the future Hall of Fame cornerback Champ Bailey. And just once in that span has only one defensive player been taken in the top 10, Mean Joe Greene, who went fourth to the Steelers in 1969.

Don’t expect many running backs to be taken.

Considering the preponderance of productive late-round or undrafted running backs, teams tend not to draft them high. Most mock drafts have none or one being chosen in the first round — either Najee Harris of Alabama or Travis Etienne of Clemson — and not until the second half. Neither Kelly nor Chahrouri and Eager project that a running back will be taken on Thursday. In picking two to go within the first 30 picks, King is an outlier. Citing Pittsburgh’s miserable running game last season, King sees Harris joining the Steelers at No. 24. Etienne, he wrote, is a fit with Buffalo at No. 30.

“I’m not a huge fan of rushers in the first round, but the Bills are in top-off mode: What player can they use to make a very good roster a tick better?” King wrote. “And Etienne, combined with the great weapons already on the offense, would be a pretty great add to an offense that averaged 31.3 points a game last year. He’d be an extra headache for defensive coordinators to solve.”