Every time Jacob deGrom takes the mound these days, a wave of anticipation rises across the baseball world. Will he strike out 20 batters? Could he throw a no-hitter? A perfect game?

All of that seems entirely plausible, especially this year, in which deGrom has burst off the starting blocks at a record-setting pace. His 100-mile-per-hour fastball, combined with a vicious slider and changeup, have vaulted him to the top of the pitching mountain, and each one of his starts has become compulsory viewing for fans — if only to avoid missing a historic performance.

But deGrom is a superstar, not a superhero, and there are times when this seeming immortal-in-the-making is merely excellent, instead of sensational. Wednesday provided the setting for one of those games, as deGrom took a small but noticeable step down from his brilliant performance the week before yet still limited the Boston Red Sox to one run and three hits over six innings. He also struck out nine batters, for 59 punch-outs on the season.

But it was not good enough, as the Red Sox beat the Mets, 1-0, in front of a disappointed and surly audience, announced as 8,051.

Four Boston pitchers did to the struggling Mets batters the kind of things that deGrom had been doing to opponents all year: They combined on a two-hit shutout with 15 strikeouts, almost mimicking deGrom’s previous outing against the Washington Nationals on April 23.

“He was tremendous again,” Luis Rojas, the Mets manager, said of deGrom. “We didn’t back that up.”

After his first four starts, deGrom, who has already won two National League Cy Young Awards (2018 and 2019) as the best pitcher in the league, established himself as the leader for a third trophy. He struck out 14 against the Marlins on April 10, 14 more against the Rockies on April 17 and 15 against the Nationals on April 23. That made him the only pitcher in modern history to have three consecutive games with at least 14 strikeouts and one or fewer walks. 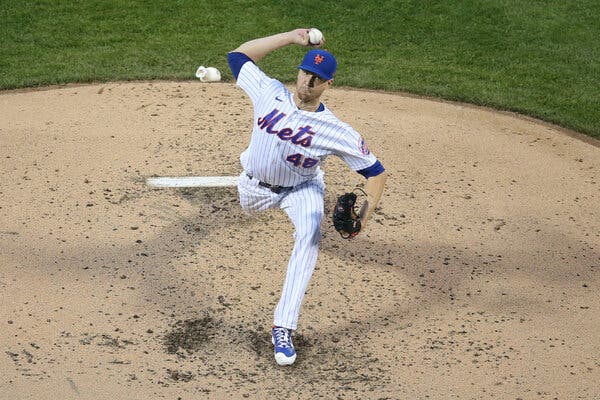 After two straight wins in which the Mets scored a combined 10 runs, deGrom got no support on Wednesday. Credit…Brad Penner/USA Today Sports, via Reuters

And even after Wednesday’s relative decline in production, deGrom’s earned run average is a minuscule 0.51 and his career E.R.A. is 2.55, better than Tom Seaver’s Mets record of 2.57 for pitchers with at least 1,000 innings pitched.

And with nine more strikeouts on Wednesday, deGrom tied Nolan Ryan’s record of 59 strikeouts in the first five appearances of a season.

DeGrom’s starts have long attracted attention, but this year they have been elevated to appointment viewing, just as it was when Tom Seaver, Dwight Gooden, Pedro Martinez and even Matt Harvey pitched at home. The stands were often full and the buzz palpable when those aces were in their primes.

This year, seating capacity is limited at Citi Field because of the coronavirus pandemic, but 8,000 fans are still capable of making a fuss when deGrom is at his peak, the way he was against Washington. On Wednesday, they sensed he was not at that same level, especially when he required 10 pitches to put away Nick Pivetta, the opposing starting pitcher, who fouled off six straight pitches before striking out in the third.

That is not supposed to happen against deGrom. Nor do teams hit three hard doubles off him when he is throwing his best stuff. But he has allowed only two earned runs all year, and lost both of those games, prompting more questions about the lack of run support from the sputtering Mets batters.

“I try not to think too much about it,” deGrom said. “I’m more disappointed I wasn’t able to make pitches in the second inning.”

Pitchers who have been booed mercilessly off mounds after getting pummeled have been far less critical of themselves than deGrom was Wednesday night. He said his mechanics were off, so he had been unable to locate his fastball, especially down in the strike zone. He said that had allowed a good-hitting team like the Red Sox to take advantage.

But really, they only took advantage once. Xander Bogaerts led off the second inning with a double to the wall in left field, and one out later, Christian Vazquez doubled to right, scoring Bogaerts. That was it. The only other hit deGrom surrendered was a double down the right-field line by Rafael Devers with two outs in the fourth inning, and he then struck out Vazquez.

Dominic Smith and the rest of the Mets offense had no answer for Boston’s pitching. They managed just two hits and struck out 15 times.Credit…Frank Franklin Ii/Associated Press

“I’m just disappointed because of how good I felt mechanically last time out there, and I wasn’t able to repeat that,” deGrom said. “It was frustrating.”

The fans were far more frustrated with the offense, and rightfully so. Francisco Lindor, who recently signed a 10-year, $341 million contract extension, went 0 for 3 with two strikeouts, lowering his batting average to .203, and heard more booing from the impatient fans.

“It’s interesting, and it’s funny, and it sucks,” Lindor said before the game, referring to the booing in the previous game. “It doesn’t feel right, for sure.”

He said it was the first time in his career he had been booed and, curiously, added that he did not consider himself to be slumping.

“They expect results,” Lindor said of the fans. “I expect results, and I get it. It’s part of the job. I just hope they cheer and jump up when I start hitting home runs and helping the team on a daily basis a lot more than I’m doing now.”

DeGrom, on the other hand, is always striving for perfection and probably considers himself to be in a deep slump after Wednesday’s marginal disappointment. He might be the only one to think that way.

“If Jake deGrom doesn’t have good stuff and goes six innings with one run and nine punchies,” the catcher James McCann said, “he must be pretty darn good.”

Many people will tune in next week, when deGrom pitches again, to find out for sure.