1. He spent nearly a half-century in rehearsals.

If you want to assess Joseph R. Biden Jr.’s first 100 days in office, it helps to wind back nearly 18,000 days to the beginning. When President Biden was first elected to the United States Senate, in Stone Age 1972, the country was still mired in Vietnam; the Watergate break-in that would tank the Nixon incumbency failed when bungling burglars dressed in business suits and surgical gloves were nabbed by members of the Capitol Police department’s “bum squad” (as their lookout sat in a motel across the street watching “Attack of the Puppet People”); and first episode of “The Price is Right” was aired on CBS, hosted by Bob Barker.

“The Price is Right” is still around after nearly five decades. So, of course, is Mr. Biden. (Mr. Barker, too, it should be noted.) Although now crowding 80, President Biden retains some of the mediagenic qualities that ushered him into the political limelight just as political theater became a daily amusement thanks to a constant — if not yet a 24-hour — news cycle. 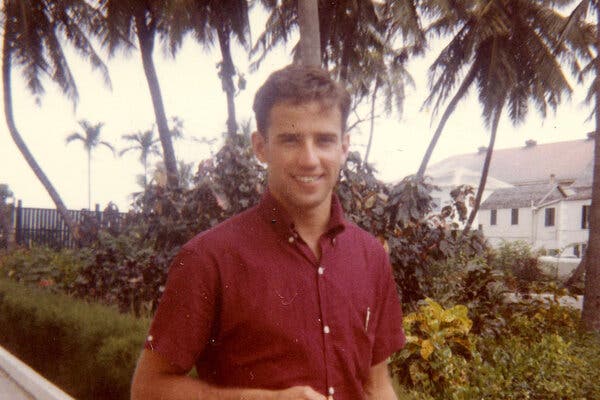 As a young man, Joe Biden settled into the unpretentious identity that would become his political brand.Credit…via Biden Campaign

2. He had a head start in the looks department.

Politicians are, obviously, under no obligation to be comely — male ones, anyway. Still, starting with the Kennedy presidency — the first in American history to be fully televised — it has never hurt any candidate’s prospects to be conventionally good-looking. We’ve seen the young Joe images on Twitter — he of the boyish smile and a short-sleeved button-down red shirt. He looks a bit like a scout leader, something that in those days you could say as a term of approval.

The young Biden appears alert, easygoing, guy next door. In “Prime Green,” Robert Stone’s somewhat obscure memoir of a weed-fueled odyssey he took across the United States in the ’60s, he made a stop in Salt Lake City. While the novelist spared little affection for the state’s high desert capital, he indulged in some generalizations about its population, saying of the locals that they were perhaps the best-looking folks in the country, provided you like “the Anglo type.”

Mr. Biden is physically cast in that same mold; his was the face of a second lead in a ’40s B-movie. And if anatomy is presidential destiny, Mr. Biden slots easily into the role — somewhere between the reverse-engineered Everyman that was Ronald Reagan and John F. Kennedy, the doomed Camelot princeling.

“I think he played to all of that,” the men’s wear designer Billy Reid recently said of Mr. Biden’s ability to capitalize on his natural attributes. “I think he shaped his image in a Kennedy-esque way. He’s cultivated this super-American, East Coast kind of look through the years, and he seems very comfortable with that.”

İlginizi Çekebilir;  Tesla’s Latest Solar Stumble: Big Price Increases
Candidate Joe dressed in a polished yet relaxed manner for a campaign kickoff rally in May 2019. Once elected, he would seldom be seen without a suit and tie.Credit…Erin Schaff/The New York Times

3. He found a formula and refined it.

In fact, there were several formulas that shifted as Mr. Biden went from candidate to president-elect to the inauguration. The man the White House press secretary Jen Psaki referred to early on as looking to project a “cool grandpa” vibe sharpened his message as his campaign evolved. As the writer Geoff Colvin noted in a shrewd analysis for Fortune, candidate Biden followed longstanding management-consulting practice by dressing like the clients but a little bit better.

Other than at the debates, candidate Biden’s preferred uniform was a navy jacket, unmatched (often gray flannel) trousers and an open-neck, striped button-down shirt. If you drilled down into the details, his footwear could occasionally be seen as too fancy: Regular Joes tend not to wear driving moccasins. Yet the mirrored shades that caused the longtime political analyst Mark Shields to grouse that the country needed to see “less of aviators Joe and more of Scranton Joe” did not, in the end, seem to bother voters and may even have aided in diverting attention from the glaring fact that, if elected, Mr. Biden would become the oldest man in history to assume the presidency.

Then Mr. Biden won. And almost immediately his attire shifted. Even before the pandemic lockdown, the 400-year-old uniform that is a man’s suit was in trouble. (“We hardly see anyone in a suit anymore — other than at a wedding, a funeral, in court or if they’re a politician,” Mr. Reid said.) Still, as Mr. Biden’s advisers are clearly aware, there remains no sartorial marker of authority and status that reads more clearly than a suit. And, from the moment The Associated Press declared Mr. Biden the winner, he has seldom been seen in anything other than dark-colored suits worn with crisp white shirts (button-cuffed) striped ties and dark lace-ups.

“The thing I like is that his suits are impeccably tailored,” the men’s wear designer Todd Snyder said. “Where a lot of men typically go too big, Biden is a good example of exactly how a suit should be worn.”

“His trousers have the perfect proportion and the right amount of break in the pants,” he added, referring to that point where a trouser hem meets the top of one’s shoes. You have only to observe the style missteps at the Academy Awards to know that even the assistance of the world’s top designers and stylists is no guarantee that guys as advantaged as Brad Pitt or Denzel Washington get this part right.

“He cuts such a chic silhouette,” said Michael Sebastian, the editor of Esquire. “And that does several things. It gives him the appearance of being way more youthful than he is. And it communicates something important about his governing style.” That is, Mr. Sebastian said, Mr. Biden looks as if he has come prepared to do business.

4. That is, he looks presidential.

If clothing, as Mr. Colvin noted, is a language, the Biden message is one of physical command and taut assurance. While it was easy enough during the campaign for his opponent to snipe about a “Basement Biden” hiding out in his rec room in a Barcalounger, the physical evidence suggests Mr. Biden was likelier to have been putting in miles on a Peloton.

“He’s obviously fit for a guy of any age, and that never hurts when it comes to wearing clothes,” Mr. Snyder said.

From Inauguration Day onward, the clothes President Biden has worn tend toward formal single-button suits in solid dark colors (designed by Ralph Lauren for the Inauguration and since then by designers the White House declines to identify); ties generally of Democrat blue, though on occasion reverting to stripes but with the stripes usually going from the wearer’s upper right to lower left, in the American manner (Barack Obama’s English-style rep stripes tilted in the other direction); and shoes that are softly buff-polished.

Sure, there are elements that can be interpreted as elitist, like the stainless Rolex Datejust that, as my colleague Alex Williams piqued some liberals by noting, Mr. Biden wore to his swearing in. (Presidents Clinton and Bush favored Timex; Mr. Obama’s timepieces came from Shinola.)

Mocked for doing so, Mr. Biden — here visiting his hometown, Scranton, Pa., on Election Day — insisted on wearing a protective mask, an act that proved to be both good politics and sound public policy.Credit…Erin Schaff/The New York Times

The most potent symbol Mr. Biden has worn, of course, has been the protective mask that drew derision on the campaign trail but may have been instrumental in getting him elected.

Without question it is the body inside the clothes and the president’s carriage that carries the most significance when it comes to looking at President Biden’s style. Through both his ostentatious peppiness and the military uprightness of his bearing, he seems determined to dispel doubts about a man of his years carrying the burden of the presidency while simultaneously telegraphing physical preparedness and an aura of steady authority.

“He doesn’t need a power suit to communicate power,” said Valerie Steele, the director and chief curator at the Museum at the Fashion Institute of Technology, recalling Donald Trump’s $6,000 Brioni suits. “He’s old school in the sense that he’s dressing in clothes and in a manner that is respectful of the job and of us as Americans. People of my dad’s generation would have gotten that instinctively.”

In that sense, President Biden’s austere wardrobe choices are a throwback. “His clothes are like a uniform telling you that he understands the job and he’s carrying it out in service to you as citizens,” Ms. Steele said. At a time when the boundaries between public and private are badly eroded, and when dressing like an adult baby in public is more rule than exception, it is reassuring to see a presidential figure who is unambiguously adult.

Douglas Emhoff, introduced by Vice President Harris as the “second gentleman” at a Denver listening session in March, is less often seen in suits than T-shirts that cheer for Team Kamala.Credit…Erin Schaff/The New York Times

There is, of course, another man at the center of American political life. That would be Douglas Emhoff, the husband of Vice President Kamala Harris — former entertainment lawyer, adoring husband, adorable dad-bod sex symbol for a fervent and growing #DougHive fan base.

Mr. Emhoff is not the first male political spouse, but he is the first second gentleman in history. (Check out the T-shirts.) And while it is too soon to read the runes for cues to the workings of a relationship that breaks so starkly with White House tradition, it is clear at this point in the arc of a Biden administration that Mr. Emhoff is content to tuck himself behind the first female, first African-American and first Indian-American vice president. Aside from a Ralph Lauren suit he wore to the inauguration, he dresses the part of Eve’s Rib in “Kamala” T-shirts and ball caps blazoned with the Bison logo of the football team at Howard University, Ms. Harris’s alma mater.

If Prince Philip will be remembered as Queen Elizabeth’s “liegeman of life and limb,” Mr. Emhoff may go down in history as Vice President Harris’s cheerleader in chief.