SEOUL — Picasso, Monet and Dali are among the assets South Korea’s richest family is parting with as it prepares to pay one of the largest inheritance tax bills in history.

The Samsung family announced on Wednesday that it will pay $10.8 billion in inheritance taxes after the death of Lee Kun-hee, Samsung’s chairman, last year. South Korea has one of the highest inheritance taxes in the world. ​The family is required to inform the tax authorities of how it plans to pay the bill by Friday.

The answer will have deep implications for the family’s control of the company, the biggest and most profitable family-run conglomerate in South Korea. ​

Mr. Lee was credited with turning Samsung into a global tech giant known for its semiconductors and smartphones. But the reclusive chairman kept many secrets, including how he wanted to split his wealth ​among his wife and three children after he died.

Mr. Lee’s only son, Lee Jae-yong, is the de facto leader of Samsung. If he inherits his father’s shares in Samsung subsidiaries, it would tighten his control of the company. But it remains unclear how much he will inherit or how he will raise the billions of dollars needed to pay the inheritance tax. ​

Analysts expected Mr. Lee to sell some nonessential Samsung shares and secure bank loans​, hoping to pay them back with dividend payouts ​from his Samsung holdings​.

“How to split Chairman Lee’s fortune is at the heart of the question of who controls Samsung,” said Chung Sun-sup, editor of chaebul.com, which monitors South Korea’s family conglomerates, also known as chaebol. “It appears that the family has not yet reached a complete agreement.”

The family ​said it will donate Mr. Lee’s personal art collection of 23,000 works to national and provincial museums in South Korea as part of its plan to dispose of Mr. Lee’s estate. The collection is estimated to be worth $2.2 billion by some South Korean media. It includes Claude Monet’s “Water Lilies” and Pablo Picasso’s “Portrait of Dora Maar.” 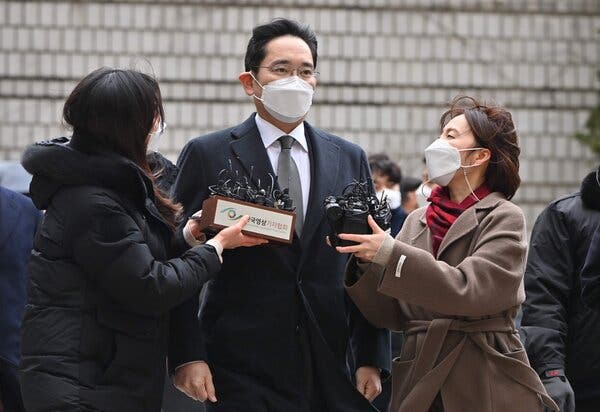 ​Lee Jae-yong, the vice chairman of Samsung, in January before he was convicted of bribery and sentenced to two and a half years in prison.Credit…Jung Yeon-Je/Agence France-Presse — Getty Images

The family also committed $900 million to fight the growth of infectious diseases, and to help children suffering from cancer and rare diseases. Half of the sum will be spent building South Korea’s first hospital dedicated exclusively to infectious diseases.

The Lee family said the donations reflected Mr. Lee’s intentions of “giving back to communities. ”​ But this sudden generosity comes at a time when the family has struggled to improve its public image.

In January, the son, who is vice chairman of Samsung, was imprisoned after being sentenced to two and half years for bribery. ​In recent weeks, business lobbying groups have ​appealed to the government to pardon ​Mr. Lee so that he could lead Samsung amid growing uncertainty in the semiconductor industry.

“It is our civic duty and responsibility to pay all taxes,” the Lees said on Wednesday in a statement.

​The family has not always abided by that rule.

Samsung has long faced accusations of trying to secure a father-son transfer of power at all costs, even if that meant breaking laws, avoiding taxes and buying political influence. It’s a problem that Lee Jae-yong, the son, has acknowledged himself.

“All of the problems basically started from this succession issue,” he said last year. “From now on, I will make sure that no controversy happens again regarding the succession issue.”

His father received a suspended three-year prison sentence in 2009 for evading taxes on billions of dollars he secretly inherited from his father, Samsung founder Lee Byung-chull. He hid the money in stock accounts opened in the names of his aides. Samsung at the time said that Lee Kun-hee kept the secret funds to protect the company from hostile takeovers from foreign investors.

Lee Jae-yong’s legal trouble stemmed from a similar problem. In January, ​he was convicted of bribing South Korea’s former president, Park Geun-hye, to obtain government support for a merger of two Samsung subsidiaries in 2015. The merger was meant to tighten his control over Samsung.

The late Mr. Lee was credited with turning Samsung into a global tech giant known for its computer chips and smartphones.Credit…Jung Yeon-Je/Agence France-Presse — Getty Images

Who will control Samsung has been the subject of much public curiosity since the father’s death last year. The company accounts for one-fifth of South Korea’s total exports. Samsung Electronics, the flagship of the group, alone posted $213 billion in revenue and $32 billion in operating profit last year.

Lee Jae-yong has been running the conglomerate since a heart attack incapacitated his father in 2014. He owns only 0.7 percent of Samsung Electronics but holds 17.5 percent of Samsung C&T, a subsidiary created through the 2015 merger. His siblings also hold smaller stakes, giving the family a controlling stake in the company.

By law, the chairman’s widow, Hong Ra-hee, is entitled to one-third of the total inheritance, with the rest split equally among ​Mr. ​Lee and his two sisters. But chaebol families often reach a private agreement to ensure that the eldest son controls the company.

Some South Koreans on Wednesday were ​amazed to learn the amount of inheritance taxes to be paid by the Lee family.

“Ordinary people like me can’t fathom how much it is,” said Park Soon-mi, a stay-at-home parent in Seoul. “It’s good for the chairman to ​​leave so much money in taxes and make such big donations for the society.”

Others were not so impressed.

This is not the first time the Lee family has promised to use its wealth to benefit society as part of a larger scheme. Back in 2008, when Lee Kun-hee was indicted on charges of evading taxes, Samsung said Mr. Lee would use the money “not for the chairman or his family, but for some beneficial causes.”

The family had not kept its word until Wednesday, said Kang Jong-min, a chaebol expert at the civic group Solidarity for Economic Reform in Seoul. “It is belatedly following up on its old promise.”