Wayne Peterson, a prolific composer whose fraught winning of the Pulitzer Prize in 1992 stirred debate about whether experts or average listeners were the best judges of music, died on April 7 in San Francisco. He was 93.

His son Grant confirmed the death, in a hospital, which he said came just seven weeks after that of Mr. Peterson’s companion of decades, Ruth Knier.

Mr. Peterson won the Pulitzer for his composition “The Face of the Night, the Heart of the Dark,” but only after the 19-member Pulitzer committee rejected the advice of the three-member music jury, which initially recommended that Ralph Shapey’s “Concerto Fantastique” receive the prize.

The jury was made up of composers, who had the ability to study the scores of works under consideration, whereas the committee members, mostly journalists, had no particular expertise in music. The dust-up began when the jury submitted only one piece, Mr. Shapey’s, in its recommendation to the committee, rather than three candidates, as was traditional.

The committee sent the recommendation back, demanding at least one more name. When the jury responded with Mr. Shapey’s work and Mr. Peterson’s, while indicating that Mr. Shapey’s work was its first choice, the committee awarded the prize to Mr. Peterson instead. The jurors responded with a sharply worded complaint that said, in part, “Such alterations by a committee without professional musical expertise guarantees, if continued, a lamentable devaluation of this uniquely important award.”

The incident produced considerable hand-wringing over whether experts or a more general panel should determine the winner of the music prize, an issue the Pulitzers had faced before in other genres. The dispute was puzzling because, as music critics for The New York Times wrote in the aftermath, it was not necessarily a case of Mr. Peterson’s work being more listener-friendly than Mr. Shapey’s — both men wrote atonal works. Some writers suggested that the matter was simply the Pulitzer committee asserting its dominance over the jury.

In any event, the controversy left Mr. Peterson in an awkward position, since he knew the jury members who had faulted the decision, and since he professed admiration for Mr. Shapey’s works.

“He would have been thrilled to get second place,” Grant Peterson said.

“There was no bad blood,” he added. “It was just kind of a bummer because it wasn’t of his making.”

Mr. Peterson himself acknowledged that the dispute left him with mixed feelings.

“I had sent the work in as a lark, and I didn’t think I had even a remote chance of winning,” he told The Times in 1992. “I have won other awards, but the prestige of the Pulitzer is greater than that of the others. The controversy has made it a little different. I just hope the pall that it has cast will not jeopardize what the Pulitzer could mean in helping circulate my music.”

Grant Peterson said that, in that regard, the episode proved to be a plus — the prize, he said, did boost his father’s name recognition, and it brought him more lucrative commissions. 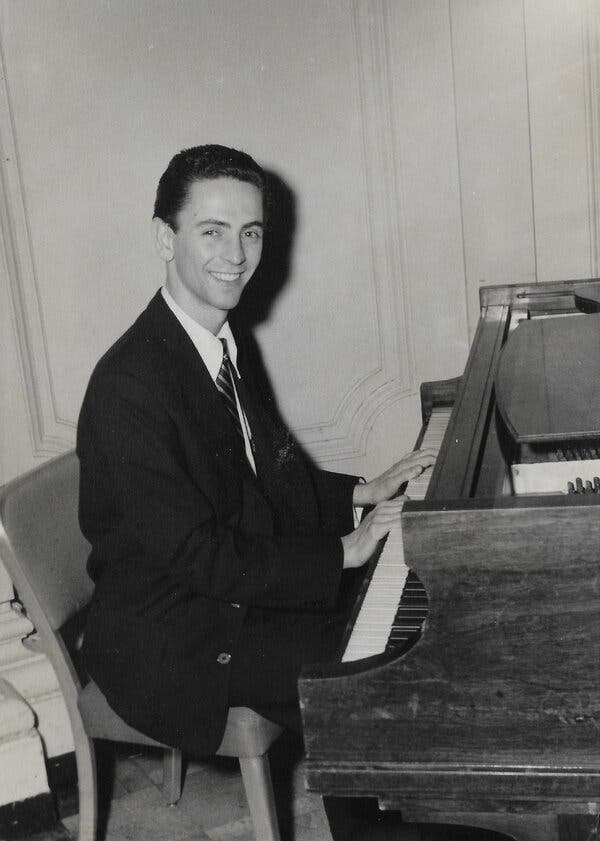 Mr. Peterson became a professional jazz pianist at 15, and his love of jazz found its way into his compositions.Credit…via Grant Peterson

Wayne Turner Peterson was born on Sept. 3, 1927, in Albert Lea, Minn. His father, Leslie, was “a victim of the Depression,” he told The Associated Press in 1992, who “bounced around from one thing to another”; his mother, Irma (Turner) Peterson, died when he was young, and he lived with his grandmother after that, his son said.

His musical ability, which he said came from his mother’s side of the family, manifested itself early.

“I became very interested in jazz piano and was a professional jazz musician from the age of 15 on,” he said. “I put myself through college by playing jazz, through three degrees at the University of Minnesota” — a bachelor’s, master’s and doctorate, all earned in the 1950s.

He became a professor of music at San Francisco State University in 1960, and taught composition there for more than 30 years. He lived in San Francisco at his death.

Mr. Peterson’s career as a composer began in 1958 with the performance of his “Free Variations” by the Minnesota Orchestra. He composed for orchestras, chamber ensembles and other groupings, sometimes unusual ones. “And the Winds Shall Blow,” which had its premiere in Germany in 1994, was described as a fantasy “for saxophone quartet, winds and percussion.” There was also his Duo for Viola and Violoncello.

“A nervous, effectively written piece, filled with dark melodies well suited to these lower string instruments, the duo builds to a fast and exciting climax,” Michael Kimmelman wrote in The Times when the work was performed at the 92nd Street Y in 1988.

Mr. Peterson thought it important for a composer to listen to others’ works, across a wide range.

“I don’t limit myself to any one group of composers,” he told The San Francisco Chronicle in 1991. “I try to listen to everything, and if I hear anything I like, it gets distilled in my psyche and comes out somewhere in my music.”

His love of jazz also found its way into his compositions, including “The Face of the Night, the Heart of the Dark.”

“There’s a lot of syncopation you can associate with jazz,” he said of that work, “but this isn’t a jazz piece.”

It was given its premiere in October 1991 by the San Francisco Symphony. George Perle, the chairman of the Pulitzer jury that recommended the Shapely piece, took pains to praise Mr. Peterson’s composition even amid the controversy.

“It is absolutely worthy of a Pulitzer Prize,” he said in 1992. “But the Pulitzer Prize is supposed to be for the single best work of the year, and on this occasion we felt that there was a work that was more impressive.”

The controversy over his Pulitzer — which the committee awarded him instead of the composer recommended by the music jury — left Mr. Peterson in an awkward position. He knew the members of the jury and respected the composer they had recommended.Credit…Grant Peterson

Even Mr. Shapey, who died in 2002 and was known for being outspoken, came to view his missed prize with a touch of humor.

“A critic in Chicago started calling me ‘Ralph Shapey, the non-Pulitzer Prize winner,’” he told The Times in 1996. “They’ll have to put that on my tombstone.”

Mr. Peterson’s marriage to Harriet Christensen ended in divorce in the 1970s. In addition to his son Grant, he is survived by three other sons, Alan, Craig and Drew, and two grandchildren.

Grant Peterson said that since his father’s death he had been going through his papers and had been astonished at his productivity — not just his roughly 80 finished compositions, but the countless fragments.

“There’s the stuff that’s bound and finished and published,” he said, “but mixed in with that is the chicken-scratch on yellow tablets. The guy was a music machine.”