The effort by Gov. Andrew M. Cuomo’s office to obscure the pandemic death toll in New York nursing homes was far greater than previously known, with aides repeatedly overruling state health officials over a span of at least five months, according to interviews and newly unearthed documents.

Mr. Cuomo’s most senior aides engaged in a sustained effort to prevent the state’s own health officials, including the commissioner, Howard Zucker, from releasing the true death toll to the public or sharing it with state lawmakers, these interviews and documents showed.

A scientific paper, which incorporated the data, was never published. An audit of the numbers by a top Cuomo aide was finished months before it became publicly known. Two letters, drafted by the Health Department and meant for state legislators, were never sent.

The actions coincided with the period in which Mr. Cuomo was pitching and then writing a book on the pandemic, with the assistance of his top aide, Melissa DeRosa, and others.

And they came as the governor’s approach to nursing homes was receiving intensifying scrutiny from critics and Republicans, including former President Donald J. Trump, whose administration made a public show of requesting nursing home death data from four states with Democratic governors, including New York.

The number of nursing home residents who died in the pandemic has been a particularly sensitive question for the Cuomo administration.

As the first wave hit New York in March 2020, the administration put in place a policy to prevent nursing homes from turning away patients discharged from hospitals after treatment for Covid-19. Some critics blamed the approach for the large number of resident deaths in the spring, a toll that the administration then put at around 6,000.

But by the time the policy was rescinded less than two months later, it had become clear that not all the deaths were being included in that tally: Those who died after being transferred to hospitals were not counted as nursing home deaths. Lawmakers and others began asking for a complete count of all resident deaths, but the governor’s aides said parsing the numbers was difficult because of a fear of double counting, among other possible errors.

The full data on nursing home deaths was not released until this year, after a report by the state attorney general in late January found that the official tally might have undercounted the true toll by as much as 50 percent. 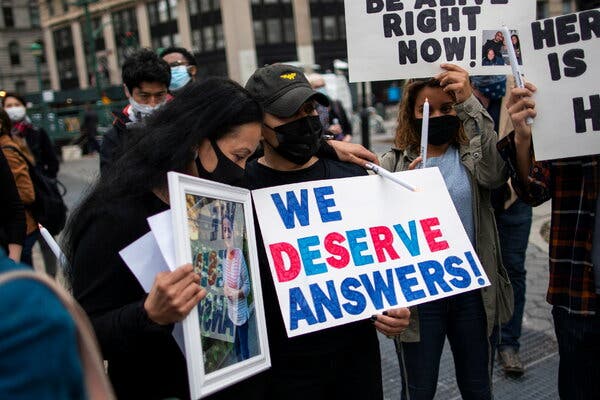 A candlelight vigil on March 25 for nursing home residents who died of the coronavirus. The administration initially prevented nursing homes from turning away patients discharged from hospitals after being treated for the virus.Credit…Eduardo Munoz/Reuters

That was something Mr. Cuomo’s aides had known since the previous spring, The New York Times found.

Elkan Abramowitz, a lawyer representing Mr. Cuomo’s office, said the administration was reluctant to release numbers it did not believe were reliable.

“The whole brouhaha here is overblown to the point where there are cynical suggestions offered for the plain and simple truth that the chamber wanted only to release accurate information that they believed was totally unassailable,” Mr. Abramowitz said.

İlginizi Çekebilir;  How Long Can We Live?

“The chamber was never satisfied that the numbers that they were getting from D.O.H. were accurate,” he said, adding that the actions by Mr. Cuomo’s aides had nothing to do with the governor’s book.

The Cuomo administration’s handling of nursing home death data now is the subject of a federal investigation, one of at least four overlapping inquiries into the governor and his administration. As of this month, more than 15,500 nursing home residents with Covid-19 have died.

The state attorney general, Letitia James, is also looking into sexual misconduct accusations against the governor, and into whether Mr. Cuomo misused state resources to write his book on the pandemic. The State Assembly is conducting an impeachment inquiry.

The governor has denied wrongdoing and urged patience as the inquiries proceed, even as prominent New York Democrats, such as Senator Chuck Schumer, have called for his resignation. Mr. Cuomo has held on to support among many Democratic voters in recent polls, but on nursing homes, he has received sharply negative marks.

After the first wave of coronavirus infections and Covid-19 deaths peaked in April 2020, health officials began trying to figure out how many nursing home residents had died, according to three people with knowledge of the process who spoke on condition of anonymity to discuss its details.

The officials surveyed nursing homes late last April — a process overseen by Mr. Cuomo’s aides — and gathered data on residents who died in the facilities, as well as those who had died after being transferred to hospitals, the people said.

Amid criticism about Mr. Cuomo’s policies, the Health Department began preparing a report on the issue in the spring of 2020, under the close watch of the governor’s top advisers.

“We are getting anxious over here on this report,” wrote Ms. DeRosa in an email to health officials and top Cuomo aides on June 18, which was reviewed by The Times. She laid out what the strongest points that should be made in the report were “from my perspective”; each had to do with knocking down the idea that readmitting infected people to nursing homes was problematic.

“Needs to be able to stand up to scrutiny and definitively tell the story,” Ms. DeRosa added.

The final version of the report, which The Times has reported was rewritten several times by senior advisers to Mr. Cuomo and published in early July, emphasized that admissions from hospitals “were not a driver of nursing home infections or fatalities.” Instead, the report contained the lower death count and cited staff as the most likely source of infections.

But another version of the study, aimed at the scientific press and drafted at the same time by nearly a dozen health officials, took a more nuanced view.

That draft, reviewed by The Times, reached the same conclusions but included a lengthy paragraph describing the limitations of the analysis, such as a lack of information about staff-resident interactions. It put the number of residents with Covid-19 killed in the pandemic at 9,739 through the end of May, far higher than what the administration was saying publicly at the time.

“Approximately 35 percent” of all deaths at that point “were nursing home residents,” the draft concluded.

But that version was never published. And the publicly released report instead claimed 21 percent of all deaths in New York were in nursing homes.

That percentage was better than in all but four states — because most if not all other states included nursing home residents who died in hospitals in their tally — and it became a talking point for the governor.

Even as internally, health officials had increasing confidence in the statistics on nursing home deaths, by May, it was clear to lawmakers and others that the Cuomo administration was not including residents who had died in hospitals in its tally of nursing home deaths. State officials said they could not release the figures because of the possibility of “double counting” or other issues in the data.

It was the primary reason given by Dr. Zucker, the health commissioner, during a pair of hearings on nursing homes at the State Legislature in August. “When the data comes in,” he testified, “then I will be happy to provide that data to you.”

But after that first hearing, an audit was ordered by Ms. DeRosa, who appeared not to trust the Health Department’s statistics, according to two people with knowledge of the discussions, who requested anonymity to discuss closed-door decisions. She sent Gareth Rhodes, a top coronavirus adviser to Mr. Cuomo, to the Health Department in mid-August, according to the people, and he sat with senior health officials to go over the numbers.

“We are getting anxious over here on this report,” Melissa DeRosa wrote in an email to health officials and top Cuomo aides in June.Credit…Justin Lane/EPA, via Shutterstock

His initial check of the data was completed by the end of August. It flagged roughly 600 deaths for further investigation by the Health Department, the people said, but did not alter the fact that by then more than 9,000 nursing home residents had died in the pandemic.

It was then, just as the initial audit was completed, that the Trump administration publicly requested data on deaths of nursing home residents. The request came from the Justice Department and was limited to publicly run nursing homes — a few dozen out of the more than 600 nursing homes in New York.

Officials saw the move as a political ploy to embarrass Democratic governors. The inquiry would become a new reason offered by Mr. Cuomo’s office for withholding the data: Ms. DeRosa would later say in a Zoom call to legislators that she and other Cuomo aides “froze” because of the federal request.

But top legislative officials told The Times in interviews that was not the reason they were given at the time. “That was never expressed to us before. It was just, ‘We need accuracy, we’ll get back to you,’” said Senator Gustavo Rivera, the chair of the health committee.

Behind the scenes, health officials and Mr. Rhodes urged finally releasing the data containing the total number of deaths, noting that the small percentage of those flagged for possible errors in the audit could be added later.

By early September, the Health Department had shared its draft letter with Mr. Cuomo’s office for approval. But approval never came. It was not sent to legislators.

At about the same time, on Sept. 9, the governor’s office provided the data that the Trump administration had requested.

“The chamber responded to the D.O.J. request with what they deemed to be totally accurate numbers,” Mr. Abramowitz said. “They didn’t want to have a public debate about other numbers at the same time.”

“What’s going on in the press now is exactly what the chamber wanted to avoid while William Barr was A.G.,” he added, referring to Mr. Trump’s attorney general.

State lawmakers and reporters continued to ask about the missing figures. During a telephone news conference on Columbus Day — Oct. 12 — Mr. Cuomo was again asked when the numbers would be released.

“On the numbers, there’s a lot of politics being played,” Mr. Cuomo told reporters.

Later that day, Mr. Cuomo convened a call about the data on total deaths with Ms. DeRosa, Dr. Zucker and other health officials, according to two people with knowledge of the call. He suggested the figures would have to come out at some point. (A spokesman for Mr. Cuomo, Richard Azzopardi, said Ms. DeRosa did not take part in the call.)

Mr. Cuomo’s book, for which he received a multimillion-dollar advance, was published the next day. It quickly became a best seller.

Some on the call believed that the governor’s interest meant that he wanted the numbers released, according to the people with knowledge of the conversation. But Mr. Cuomo threw another wrench in the system, the people said: He asked for further analysis of the data.

“He was interested in putting out only accurate information to highlight the contrast between Albany and Washington,” said Mr. Abramowitz.

After that analysis, which did not change the overall figures, the Health Department later that month again felt comfortable with the data on deaths of nursing home residents.

“I am writing to share the findings of the New York State Department of Health’s analysis of nursing home fatality data,” read another draft letter, which carried a proposed November release date and Dr. Zucker’s name.

In the one-page draft letter addressed to the State Assembly speaker, Dr. Zucker shared the total number of deaths, which at that point was 9,835 through Oct. 30.

“I hope you find the information to be helpful as the state continues to examine this important issue,” he wrote.

The letter was never sent.