Minnesota started its 2020 census outreach in 2015, bringing together local governments, foundations and businesses to spur participation. California allocated $187 million beginning in 2019 to get its people counted. And New York City alone spent $40 million on census advertising, texts and events.

By contrast, Texas didn’t invest in a census program until last September, dedicating $15 million months after the count had begun. Florida’s governor, Ron DeSantis, said in 2019 that the state would not “have a role” in aiding the count, before ultimately agreeing to an unfunded committee in January 2020. And Arizona spent less than $1.5 million on census efforts in what remains one of the fastest-growing states.

The sharply divergent ways that states either embraced census efforts or treated them as a low priority are now having significant repercussions for each state’s power in Congress and its Electoral College votes throughout the 2020s. While the Census Bureau results released on Monday showed the West and the Sun Belt continuing to grow in population, the political gains were softer than expected.

Arizona, Florida and Texas — Republican-run states that committed relatively few resources to the census — each ended up with one House seat fewer than the Census Bureau had forecast, while Minnesota and New York, controlled by Democrats, did better than expected.

The more detached approach taken by the three Sun Belt states raised questions about whether Republican leaders had limited their states’ political clout by not doing enough to encourage participation. And because those states have some of the largest Hispanic populations in the country, the census is already fueling a debate over whether that group may have been significantly undercounted.

“It’s too much of a coincidence that these are three states with large Latino populations and these are three states where Republican governors did not invest in their own outreach efforts,” said Arturo Vargas, the chief executive of the National Association of Latino Elected Officials, referring to Texas, Florida and Arizona. “There’s a lot going on here: What impact did the state investments have? What impact did the pandemic have? Too many questions to just accept the number at face value.” 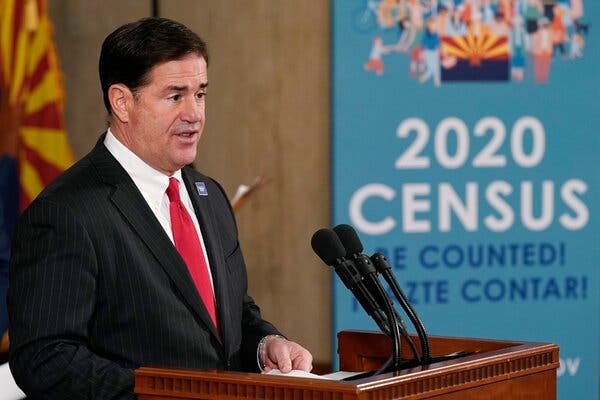 Eric Holder, the former U.S. attorney general who leads the National Democratic Redistricting Committee — which aids the party’s efforts in state legislatures, which control redistricting in most states — cited the potential chilling effect of former President Donald J. Trump’s restrictive immigration policies. He said the administration’s attempts “to weaponize” the census, including the push by Mr. Trump — which was ultimately unsuccessful — to include a citizenship question, might have discouraged Hispanic people in the Sun Belt states from completing surveys.

The 2020 census figures, he said, will always be suspect.

“I just wonder if it had the impact of suppressing the count, especially in the Hispanic community,” he said Tuesday. “I’m not sure there’s any way to ever prove that or to determine whether or not that’s true, but I think that’s always something that we’re going to be wondering about.”

Adam Kincaid, executive director of the National Republican Redistricting Trust and Mr. Holder’s counterpart, said the gaps between the census projections and the final numbers raised suspicion about the figures and could diminish trust in the census, and in government in general. Arizona, Florida and Texas each received one House seat fewer than had been anticipated, and Minnesota, New York and Rhode Island each received one more seat than had been expected.

The Census Bureau, Mr. Kincaid said, has not been transparent about why its projections were off by so much in those states.

“It’s injecting more uncertainty into an already uncertain process,” Mr. Kincaid said in an interview Wednesday. “At a time when overall American faith and confidence in the government is low, this census is only going to exacerbate that.”

The bureau said last October that it had accounted for 99.7 percent of the nation’s housing units.

Tom Bonier, the chief executive of TargetSmart, a Democratic data firm, said that if the lower-than-expected gains in border states were the result of large undercounts, especially among Latinos, the Hispanic populations would be harmed. “What you’re going to see is a decrease in representation for those communities and a decrease in funding for those communities,” he said. “That makes it easier for Republicans to draw favorable maps for themselves in those states.”

Because the counting process was delayed