When demonstrations against racism and brutality in policing filled New York’s streets last summer, the police confronted protesters with tactics so aggressive and at times violent that a remorseful Mayor Bill de Blasio later issued a public apology.

But a year after George Floyd’s murder, police officers around the country say that they have been subjected to taunts and insults during the demonstrations that have left them feeling vilified. Now, one New York City police union is testing an unusual new tactic to hit back at protesters: suing them.

Last week, on the same day Mayor de Blasio released new guidelines for how the police would respond to protests, a New York City police detective, Vincent Cheung, announced that he was suing a protester who was caught on video hurling racist, anti-Asian insults at him during a protest in March. 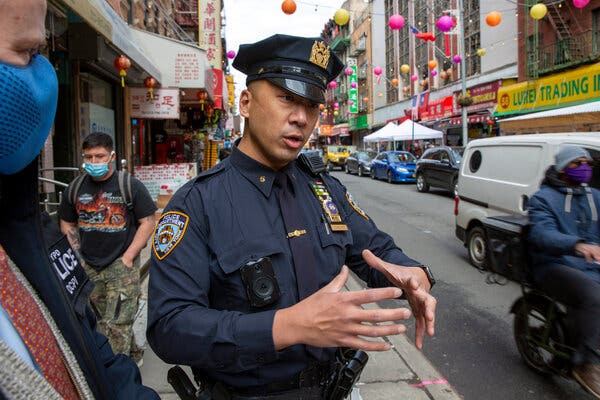 Police in New York and around the country have occasionally brought civil lawsuits against people who attack and injure them physically. But a lawsuit from an officer over words used at a protest — even hateful ones — raises thorny questions about free speech, which is often protected even at its most vitriolic.

Lawyers who observe police action closely said that they could not recall a lawsuit of this type — pursuing monetary damages from a protester for language used at a demonstration — being filed before and added that even if the suit is wholly unsuccessful, it could still represent a new way for the police to confront protesters. A lawyer representing Detective Cheung said that the police believe that civil court is “the only remedy with which they are left.”

“Many officers have said they wouldn’t hesitate to seek that remedy, not with the expectation of a financial windfall, but hopefully as a deterrent to such uncivilized and dangerous behavior,” said the lawyer, James M. Moschella.

In a video of the confrontation released by the police, the protester, Terrell Harper, was just feet from Detective Cheung’s face as he cursed at him, punctuating his comments with racist stereotypes mocking Detective Cheung, who is Chinese-American.

In the moment, Detective Cheung made no move to apprehend Mr. Harper, who is Black. The protest, on a chilly March evening in downtown Manhattan, continued. Mr. Harper said he returned home to Asbury Park, N.J., after the protest, which he said was a weekly demonstration for transgender rights and “in solidarity with end Asian hate.”

Five days later, eight people were killed in a shooting in Atlanta, six of them of Asian descent, accelerating already-growing concerns about anti-Asian hate. A week later, the police released the video of Mr. Harper.

At the news conference last week, at the headquarters of his union, the Detectives Endowment Association, Detective Cheung said he had often encountered verbal abuse before, but that he was surprised that during a demonstration for racial justice and equality, Mr. Harper had gone on what he called “an Anti-Asian beratement for over 15 minutes.”

“That type of hate directed towards myself as an Asian-American is just disgusting,” he said.

The lawsuit said that Detective Cheung had suffered severe emotional distress and was permanently and seriously injured by Mr. Harper’s conduct, which, it said, had incapacitated him from his usual duties and required him to seek medical attention. It asked that the court compel Mr. Harper to pay unspecified monetary damages.

In a video released by the police, Terrell Harper is just feet from Detective Cheung’s face as he curses at him, punctuating his comments with racist stereotypes making fun of Detective Cheung, who is Chinese-American.

In interviews, Mr. Harper, 39, apologized for what he acknowledged were racist comments. He said the video had been taken out of context, and that he typically uses racist remarks as part of a broader explanatory monologue to demonstrate what racism looks and feels like.

“I’ve got to change my method, and I came out and apologized for that,” he said.

He said that he had been organizing demonstrations all year and that the lawsuit, along with targeting him specifically, represented a way for the police to stoke tension between Asian and Black communities in New York.

Megan Watson, a Korean-American organizer who has attended several marches with Mr. Harper, said that she had worked with him to organize a February march in solidarity with the Asian-American community against police brutality.

She agreed that the lawsuit was a way to scapegoat a protest leader and deepen longstanding tensions between the communities.

She compared Mr. Harper’s monologues, which she had observed, to comedic roasts, but said that she had not heard him use anti-Asian language before. She had, however, spoken to him about the video, she said.

The detective’s lawsuit also said that Mr. Harper had spit in his face. Mr. Harper emphatically denied that, saying he believed the police would have arrested him had he done so. Asked why he had not arrested or otherwise engaged Mr. Harper, Detective Cheung said that it “was not the right moment.”

Mr. Moschella argued that Mr. Harper’s insults would cause more violence against Asians and Asian-Americans in New York.

“There’s a direct connection between hate speech and violence that is being caused to racial and ethnic groups in this city,” he said. “Words matter.”

Eugene O’Donnell, a professor at the John Jay College of Criminal Justice and a former police officer, predicted more lawsuits like Detective Cheung’s, saying that the police have been frustrated by the language protesters lobbed at them, particularly rhetoric that targets officers’ race and gender.

He added that even if a judge were to rule against the detective, the lawsuit demonstrated a “tremendous amount of potential for police unions.”

In recent months, city and state leaders have criticized the Police Department’s response to the protests that followed the murder of Mr. Floyd. A city report released in December found that the department “badly mishandled” those demonstrations. In January, the department was sued by New York’s attorney general, who has called for a monitor to oversee the police’s handling of protests.

İlginizi Çekebilir;  Disneyland is Reopening. Here’s What You Need to Know.

Richard Aborn, the president of the Citizens Crime Commission of New York City, a nonprofit group that works to improve criminal justice practices, said Detective’s Cheung’s lawsuit spoke to the sense of political isolation that the police feel. He said it could represent a novel way of holding demonstrators accountable.

“Under the right circumstances, it might be an appropriate response to unnecessary harassment of a cop,” he said.

Lawyers who study civil liberties said that the suit could well have a chilling effect on speech and protests. Alexander A. Reinert, a professor at the Benjamin N. Cardozo School of Law, said that Mr. Harper’s speech had been “reprehensible,” but added that even outrageous, hateful and discriminatory speech isn’t always actionable.

He pointed to a Supreme Court case from 2011 which found that hateful speech is protected if it involves what the court called “matters of public concern.” But he said that even if Mr. Harper were to use that or other defenses in court, or the detective’s lawsuit was otherwise unsuccessful, the suit could have a chilling effect on people’s speech at protests.

The police themselves, in New York and around the country, have long been granted broad protections from lawsuits under a legal doctrine known as qualified immunity. But, at least in New York City, that may soon change. On Sunday, legislation passed by the New York City Council that would make it easier to sue officers became law.

A day later, Detective Cheung’s union posted a video on Twitter of another of its detectives being approached by a 25-year-old man and rapped on the head with a long, white stick. The man was charged by the police with assault and criminal possession of a weapon. The union said it was considering whether or not to sue.