Brendan Hunt was struggling to find success as an actor in New York City when he discovered another way to become famous.

He began to film conspiracy theory videos about the Sept. 11 attacks and other mass killings, building an audience over many years. He posted anti-Semitic propaganda, and branded himself as a free speech warrior.He eventually became a fan of President Donald J. Trump.

But during the pandemic, Mr. Hunt’s tone escalated. The tipping point came on Jan. 8, two days after the attack on the U.S. Capitol, when Mr. Hunt published a video urging Mr. Trump’s supporters to kill Democratic politicians. A viewer notified the F.B.I., and Mr. Hunt was arrested in January.

On Wednesday, after a weeklong trial in Brooklyn, a jury concluded that Mr. Hunt’s words were not protected by the First Amendment. He was found guilty of making a threat to kill members of Congress, a federal crime that carries a maximum sentence of 10 years in prison.

Although Mr. Hunt did not travel to Washington on the day of the Capitol riot, his criminal trial was the first one in the country that required jurors to weigh the events of Jan. 6 in their verdict. Jurors watched footage from the attack and heard the testimony of a Capitol Police officer.

Mr. Hunt’s rhetoric, prosecutors said, had to be viewed in the context of the Capitol riot.

“Many watched the video clips from the Capitol in horror, but the defendant was inspired,” said Ian Richardson, an assistant U.S. attorney, in his closing statement. “He watched the events of Jan. 6, and he wanted more, more violence, more bloodshed.”

People like Mr. Hunt have long posed a challenge for law enforcement officials, who sift through violent threats online to determine which ones are worthy of criminal prosecution and which ones are protected speech. Mr. Hunt was arrested on Jan. 19, the day before President Biden’s inauguration, a signal that F.B.I. agents did not want to wait and see what he might have done on that day.

The trial centered around four social media posts that Mr. Hunt made starting in December. Upset about the 2020 election outcome, he urged the slaughter and beheading of prominent Democrats ahead of Mr. Biden’s inauguration. Mr. Hunt singled out Representative Alexandria Ocasio-Cortez, Senator Chuck Schumer and Speaker Nancy Pelosi as “high value targets.”

“We’re not voting in another rigged election,” he wrote on Facebook in December. “Start up the firing squads, mow down these commies, and lets take america back!”

In a Jan. 8 video on BitChute, a video-sharing site, he said: “If anybody has a gun, give me it. I’ll go there myself and shoot them and kill them.”

Mr. Hunt published the posts from his home in Ridgewood, Queens, about a 20-minute drive from Ms. Ocasio-Cortez’s district office. The government presented no evidence that Mr. Hunt owned or took any real-life steps to obtain weapons. 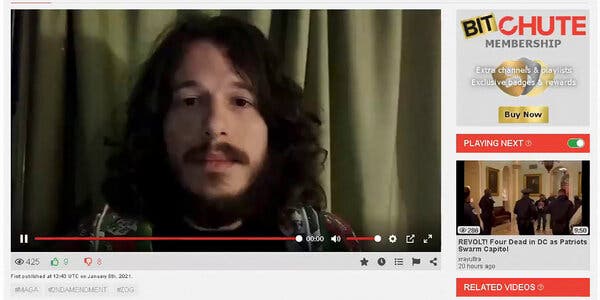 The climax of the trial was Mr. Hunt’s highly unusual decision to testify in his own defense — a risky maneuver that allowed him to share his side of the story but also meant prosecutors could cross-examine him about his anti-Semitic and white supremacist beliefs.

Before he took the stand, Judge Pamela K. Chen of Federal District Court in Brooklyn asked him repeatedly if he was sure about the decision.

During Mr. Hunt’s testimony, he apologized for his posts and took full responsibility, but insisted that he did not intend for them to be serious threats. He described himself as “a pretty immature 37-year-old.” Wearing a gray suit, blue tie and a clear plastic face shield, he seemed relaxed and spoke nonchalantly.

“The idea that I would somehow borrow somebody’s gun, waltz into Biden’s inauguration ceremony like some Looney Tunes character and somehow line up all senators and execute a firing squad on them, I think is a pretty ridiculous idea,” he said.

He has been in jail since his arrest, which he said has made him realize how irresponsible his social media posts were and how he needed to “readjust what I think is humorous.”

But the verdict showed that the jurors sided with the prosecutors, who argued that the posts were not poorly worded jokes.

Prosecutors presented evidence that Mr. Hunt repeatedly posted threatening language against members of Congress, motivated by his anti-Semitic belief that the government was controlled by a Jewish conspiracy. He created a video that was never published online in which he talked about killing Jewish people.

Mr. Hunt, a clerical worker with the New York State court system, was quick to resort to violent threats, prosecutors said. In December, after his cousin unfriended him on Facebook, Mr. Hunt sent the cousin a text message threatening to stab his child with a knife.

Mr. Hunt was charged with one count of making an illegal threat. He was not charged with inciting violence. Prosecutors did not need to prove that he intended to carry out the threat, nor that members of Congress even received the threat.

Prosecutors had to prove that a “reasonable person” would have seen the messages as real threats, and that Mr. Hunt made the threats with the intention of interfering with or retaliating against members of Congress for doing their jobs.

Daniel Bonthius, the law enforcement coordinator for Ms. Ocasio-Cortez’s office, testified at trial that he was concerned that Mr. Hunt spoke so calmly in his Jan. 8 video and did not seem mentally ill. Mr. Bonthius said he worried for his staff’s safety, as Mr. Hunt’s Facebook post about a “public execution” brought back memories of the Capitol riot.

The trial testimony became a time capsule of the world-altering events in 2020. Mr. Hunt explained that he became increasingly lonely working from home during the pandemic, drinking and smoking marijuana to deal with isolation. He listened to the news all day long, furious about government lockdowns and mask mandates.

İlginizi Çekebilir;  Biden Seeks Shift in How the Nation Serves Its People

He started visiting a neo-Nazi website and began reading Adolf Hitler’s book, “Mein Kampf.” Two days after the 2020 election, he downloaded the manifesto of Dylann Roof, the white supremacist who killed nine Black churchgoers in 2015 in South Carolina.

Mr. Hunt testified that he merely wanted to learn more about mass murderers and did not endorse their beliefs.

“Are you a Nazi?” his lawyer asked him. He replied, “No. I’m not a Nazi. I hate Nazis,” pointing to the fact that he owned comic books written by Jewish men.

After he published his Jan. 8 video calling for people to kill their senators, right-wing commenters called him an “imbecile” and asked if he had lost his mind. One person wrote: “Good way to put a target on your back and get arrested soon.” Humiliated, he deleted the video the next day.

But it was too late. Among the 502 people who viewed the video was the one who called the F.B.I. hotline. Agents opened an investigation and followed Mr. Hunt for over a week.

On the day of Mr. Hunt’s arrest, 17 law enforcement officers showed up to his home, searching for bombs and weapons. Instead, his lawyers said, the officers found a trove of comic books, toys and a Ninja Turtle sweater.

Mr. Hunt testified that when he is released from prison, he hopes to continue making videos.

“I think I should maybe stay away from the political kind of stuff or offensive material,” he said. “Maybe reviewing comic books, reviewing movies. Things like that.”