SOFIA, Bulgaria — The prosecutor general’s office in Bulgaria announced Wednesday that it was investigating a possible connection between a series of explosions at ammunition depots around the country and an elite group of Russian military intelligence operatives known as Unit 29155.

The four explosions were part of a series of blasts that occurred over the past 10 years, said Siika Mileva, a spokeswoman for the prosecutor general. At least two happened at a time when members of the unit were frequently traveling in and out of Bulgaria, she said, and among the damaged goods was military matériel belonging to Emilian Gebrev, a major Bulgarian arms manufacturer who, officials say, was poisoned in 2015, along with his son and a senior executive at his company, by members of the same Russian unit.

The announcement comes just over a week after authorities in the Czech Republic blamed two similar explosions at ammunition depots in that country in 2014 on operatives from Unit 29155, which specializes in sabotage and assassination. Those depots also contained ammunition owned by Mr. Gebrev’s company, Emco.

“A reasonable assumption can be made about a link between the explosions on Bulgarian territory, the attempts to poison three Bulgarian citizens and serious crimes committed on the territory of foreign countries,” Ms. Mileva said.

If the explosions were the work of Unit 29155, they would add to an already alarming list of operations attributed to the group. Members of the unit were behind the 2018 poisoning of a former Russian spy named Sergei V. Skripal in Britain and an attempted coup in Montenegro two years earlier. Last year, The New York Times revealed a C.I.A. assessment that the group may have carried out a covert effort to pay bounties to militants in Afghanistan for attacks on American and coalition troops. 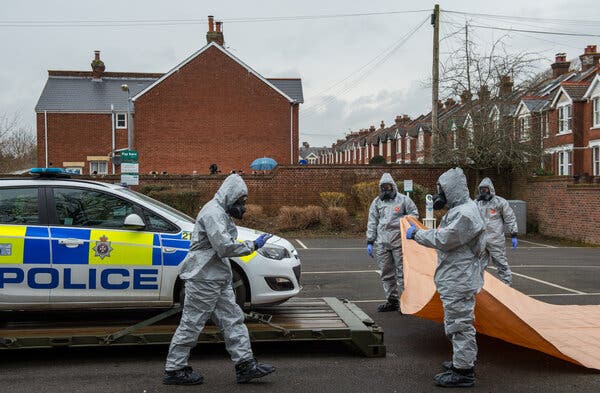 Military personnel removing a police car from a public park as they investigated the poisoning of Sergei V. Skripal on March 11, 2018, in Salisbury, England.Credit…Chris J Ratcliffe/Getty Images

Western intelligence services say the goal of all these operations is to destabilize Europe and the United States, similar to the objective of other Russian intelligence units that interfere in elections and hack into government computer systems.

But the recent revelations about explosions at ammunition warehouses point to a more specific objective: derailing Ukraine’s efforts to procure arms and ammunition at a time when the country was desperately rebuilding its military to contend with Russian-backed separatists in the east of the country.

Ms. Mileva said that some of the supplies that were blown up were destined for Ukraine, signaling that Bulgaria was likely an important supplier to the country after the war started in 2014.

Those blasts took place in 2015 at depots owned by a large Bulgarian arms manufacturer called VMZ Sopot, though Mr. Gebrev, who owns a competing manufacturer, had stored some of his stocks there, according to Ms. Mileva.

Ms. Mileva said that Bulgarian authorities are also investigating a 2011 blast at an ammunition depot owned by Mr. Gebrev’s company that destroyed matériel destined for export to the Republic of Georgia, a country with which Russia had fought a war three years earlier. An explosion last year at an ammunition depot owned by Arsenal, another Bulgarian arms producer, is also under investigation, she said. No one was hurt in any of the explosions, she said.

İlginizi Çekebilir;  A Candidate for N.Y.C. Mayor Is Accused of Sexual Assault

In a statement, Emco said it had not intended to export weaponry to Georgia ahead of the 2011 explosion and denied any connection to the blast at the VMZ Sopot depot.

But in an email to The Times last week, Mr. Gebrev acknowledged selling ammunition and military equipment to “authorized Ukrainian companies” in late 2014. Though, Mr. Gebrev insists he provided only a small amount of military equipment, it would have offered a lifeline to Ukraine at a time when few Western countries would provide weaponry.

There has long been suspicion that the explosions in Bulgaria, at least those from 2015, were acts of sabotage. Why prosecutors are choosing to relaunch their investigation now is unclear.

Unlike the Czech authorities, who revealed new details about the explosions there and expelled dozens of Russian diplomats in response, Ms. Mileva provided little new evidence and made no indication that a response was forthcoming.

A fire that broke out at an administrative building in Sofia, the capital, in May 2015 destroyed evidence related to those two blasts, Ms. Mileva said.

Bulgaria’s investigation of the explosions comes at a time of escalating confrontation between Russia and the West. For weeks, Russian troops were massing on the border with Ukraine, though in the last week they have somewhat pulled back. This month the United States announced that it would expel 10 Russian diplomats and impose sanctions as punishment for a huge breach of government computers that the White House blamed on Russia’s foreign intelligence service.

İlginizi Çekebilir;  Is This the Oldest Bottle of American Whiskey? Is It Worth $40,000?

Bulgaria, despite being a European Union member, has long maintained friendly relations with Russia, which is a critical energy supplier. But recently, there has been evidence that Bulgarian officials have grown weary of playing host to Russian intelligence operations.

In January 2020, Bulgarian authorities announced criminal charges against three officers from Unit 29155 for poisoning Mr. Gebrev, his son and the senior Emco executive. The three fell ill in April 2015, less than two weeks after one of the blasts at a Bulgarian ammunition depot. An investigation determined that they were sickened with a substance similar to the Novichok nerve agent that British authorities say was used by officers from Unit 29155 on Mr. Skripal and his daughter in the United Kingdom.

Last month, after Bulgarian officials announced the arrest of six people they said were involved in an espionage ring run by the Russian security services, the country’s prime minister, Boiko Borisov, spoke to reporters, telling the Kremlin to knock it off.