A woman who said she worked as an unpaid intern on a 2001 election campaign for Scott M. Stringer, the New York City comptroller who is now running for mayor, has accused him of sexually assaulting her 20 years ago.

The woman, Jean Kim, now a political lobbyist, said that Mr. Stringer, without her consent, “kissed me using his tongue, put his hand down my pants and groped me inside my underpants.”

“I pulled away and tried to avoid him,” she continued. “He warned me not to tell anyone about it.” Mr. Stringer also “demanded to know why I would not have sex with him,” Ms. Kim said at a news conference on Wednesday.

Mr. Stringer denied the allegations Tuesday evening, in anticipation of Ms. Kim’s news conference, saying they were “untrue and do not reflect my interactions with anyone, including any woman or member of my staff.” Tyrone Stevens, a spokesman for Mr. Stringer, said Wednesday that Mr. Stringer and Ms. Kim had had an “on and off romantic relationship.”

Ms. Kim said Mr. Stringer, who was then a state assemblyman running for New York City public advocate, also put his hand between her legs during taxi rides. By her account, he offered to make her the first Asian Democratic Party district leader on the Upper West Side, with one proviso.

“You would have to prove yourself to me,” she recalled Mr. Stringer saying.

Ms. Kim said she did not come forward earlier because she was “fearful of his vindictive nature and that he would retaliate against me and destroy my career in politics.” Her lawyer said that Ms. Kim faced less of a risk now that she was transitioning away from political work.

Mr. Stringer was expected to hold a news conference later on Wednesday.

Ms. Kim’s account, which was reported by Gothamist, comes roughly eight weeks before the June 22 mayoral primary. In the limited early polling that is available, Mr. Stringer is often in third place, behind Andrew Yang, the 2020 presidential candidate, and just behind Eric Adams, the Brooklyn borough president. 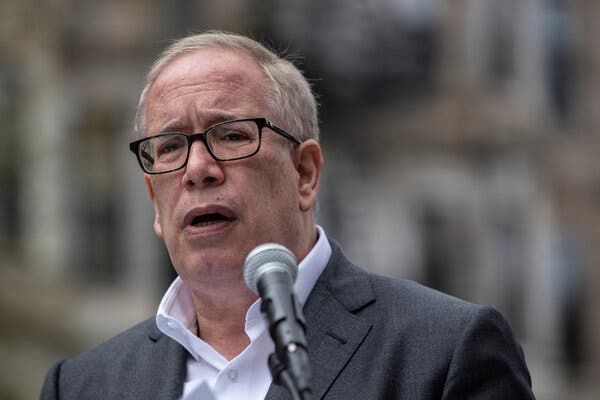 Mr. Stringer’s campaign had recently started to gather more steam, winning the endorsements of the United Federation of Teachers and the Working Families Party, as well as one of two endorsements from the New York chapter of Sunrise Movement, a group of young climate activists. “The Momentum Continues to Build” was a headline in a recent email his campaign sent to the news media.

In her remarks Wednesday, Ms. Kim said that she met Mr. Stringer in 2001, when Eric Schneiderman, who was then a state senator, introduced them. Mr. Schneiderman would go on to become New York State attorney general, before resigning amid allegations that he abused women.

Mr. Schneiderman, who admitted to the misconduct, did not return requests for comment.

Ms. Kim said that during her internship for Mr. Stringer later in 2001, she joined a West Side Democratic Club in which he was involved. Mr. Stringer “inappropriately and relentlessly pursued a sexual relationship with me,” she said.

She decided to come forward because she said she was sickened by Mr. Stringer’s run for mayor, and his portrayal of himself as an ally to women.

“When I saw him touting how he is a make-believe champion for women’s rights, that is what really put me over the top in terms of having to come out for the future of New York,” Ms. Kim said.

Ms. Kim called on Mr. Stringer to resign and withdraw from the mayor’s race.

In her remarks Wednesday, Ms. Kim said that she met Mr. Stringer in 2001, when Eric Schneiderman, who was then a state senator, introduced them.Credit…Gabriela Bhaskar for The New York Times

Stephen Levin, a Brooklyn councilman, said he had known Ms. Kim a long time professionally, and described her as a “a very nice, very good person.”

“For someone like Jean, her entire career is in New York City politics,” Mr. Levin said. “So I have no reason to believe that she’s not telling the truth. Just like in elected office, for a lobbyist, your credibility is the most important thing.”

Mr. Stringer, who has spent decades in politics, has cast himself as an ardent progressive in recent years. In the mayoral election, he is widely perceived as the most viable of the three left-wing options, along with Dianne Morales, a former nonprofit executive, and Maya Wiley, a former counsel to Mayor Bill de Blasio.

“I thank Jean for bravery in speaking out and coming forward,” Ms. Morales said. “And I offer compassion to her for what she has endured, and what is yet to come. I stand with her, and her demands for justice.”

Ms. Wiley called Ms. Kim’s account “credible and disturbing” and said Mr. Stringer “must immediately account for this abuse of a campaign intern.”

“Scott Stringer should stand by his own policy of zero tolerance for sexual harassment and drop out of the mayoral race,” Ms. Garcia said, adding that she believed Ms. Kim. “New Yorkers need and deserve a mayor they can trust, who demonstrates steady, competent and capable leadership. It is clear that Scott Stringer is not that person and that we need more women in leadership and elected office.”

“As survivors of childhood sexual assault, we believe survivors,” they said. “Our commitment to a harassment free government, workplace, and society is steadfast, and our zero tolerance standard regarding sexual assault applies to abusers like Andrew Cuomo, if not more so, to our friends.”

The news conference was called by Patricia Pastor, a women’s rights lawyer, in an email sent to reporters Tuesday evening. Ms. Pastor said in a brief phone call Wednesday morning that she worked on a referral basis, and had been working with Ms. Kim since “a week or two ago.”

State Senator Liz Krueger, a Manhattan Democrat, said that she had dealt with Ms. Kim in a professional capacity.

“I was surprised and disturbed,” said Ms. Krueger, who has not yet endorsed a candidate in the mayor’s race. “I was surprised, but there’s no reason for me not to think of Ms. Kim as a credible person.”

“Maybe it’s time for us to stop voting for men,” she added.