Cruising down Knickerbocker Avenue in the back of a vintage Lincoln Town Car on a sunny Friday afternoon, I was thrilled when the driver, Modesto Jimenez, played the Fabolous track “Brooklyn,” loudly. The song, the Lincoln’s smooth ride, life passing by on the busy streets — the combination hit like theatrical umami.

If cab theater were a genre, Jimenez would have medallion-shaped awards. Seven years ago, he performed his play “Take Me Home” in a New York City cab for up to three people at a time. For his Oye Group company’s new “Taxilandia,” he drives around his central Brooklyn neighborhood of Bushwick, regaling his tiny audience with stories and reminiscences, asides and historical tidbits, like the fact that in the 1970s and ’80s Bushwick was devastated by arson fires just as bad as the ones that laid waste to the Bronx. 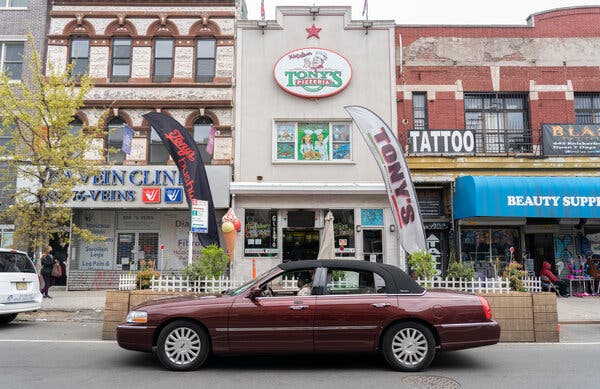 Jimenez, known as Flako, says the ride is not a tour, and discourages audience members from taking photos.Credit…Sara Krulwich/The New York Times

Jimenez, who goes by Flako, spent nine years driving a cab, and he handles the traffic with a calm confidence — which is reassuring because he also talks nearly nonstop, weaving between English and Spanish, scripted text and off-the-cuff exchanges with the passengers (a plexiglass barrier separates the front and back seats).

As for Bushwick, he knows it inside and out. He was raised by his grandmother there after moving from the Dominican Republic as a child; his autobiographical show “¡Oye! For My Dear Brooklyn,” from 2018, supplied much of that back story.

Jimenez prefaces “Taxilandia” by pointing out that it is not a tour (he discourages the fares/audience members from taking photos) but an experience. The car trip itself is just one part of a greater project that also includes the text-guided walk “Textilandia,” a 16-track playlist, storefront galleries, and virtual artists’ salons (now archived online).

“Taxilandia” is a follow-up to Jimenez’s “Take Me Home,” a play he performed in cabs seven years ago.Credit…Sara Krulwich/The New York Times

As we slowly rolled down main thoroughfares and side streets, Jimenez sketched an impressionistic portrayal of an ever-changing neighborhood, stressing that Bushwick’s history is an ebb and flow of successive arrivals, of displacement and conflict but also of energy and reinvention. We passed the community institution El Puente, where he thrived as a kid, and the former Ridgewood Masonic Lodge, which is now — you have one guess — an apartment building.

The large breweries created by the German beer barons of the 19th century are long gone; the new Bushwick prefers microbreweries anyway. We double parked so he could dissect layers of graffiti, “and right across the street,” Jimenez gestured, “the gentrification bar.” While the car is briefly in neutral, he himself is anything but.

His take on change is nuanced, though, and as a Bennington-educated artist Jimenez bridges various constituencies — he has appeared in shows by the experimentalist Richard Maxwell and at the thriving Off Off Broadway theater the Bushwick Starr, which is presenting “Taxilandia” with New York Theater Workshop, in association with the Tank.

A stop along the way near the former Ridgewood Masonic Lodge. The show is part of a larger project that includes a text-guided walk, a playlist and art.Credit…Sara Krulwich/The New York Times

The Lincoln was on the move again. On the right was a pizzeria that Jimenez claimed is the best in Brooklyn. When we passed another with a nearly identical name a minute later, I asked which slice he preferred and he started waffling. Eventually we made our way to the trendier part of the neighborhood, where young folks dine on rather more expensive pizza, and he dropped me off near a subway stop. For Bushwick, the ride continues.