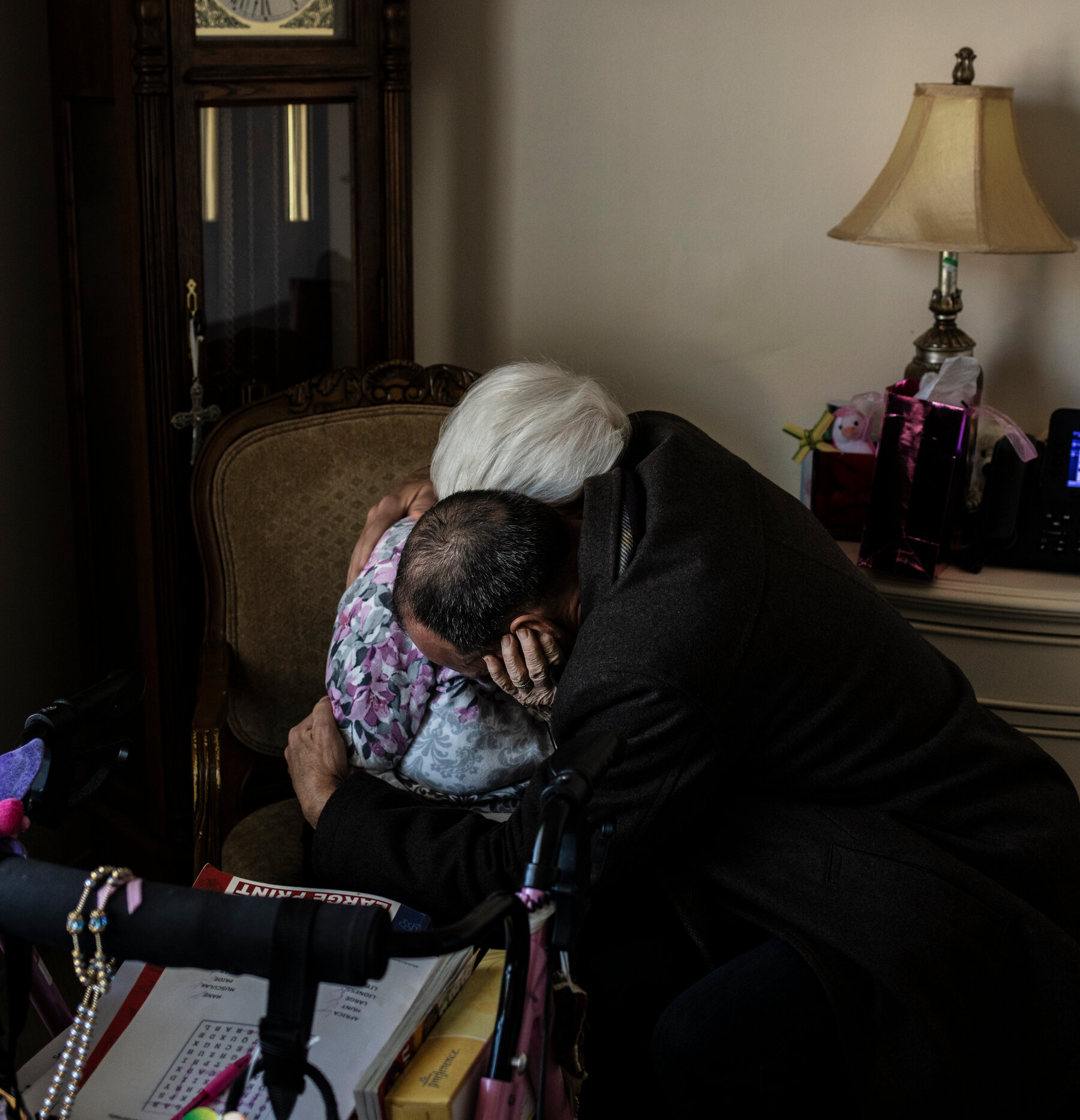 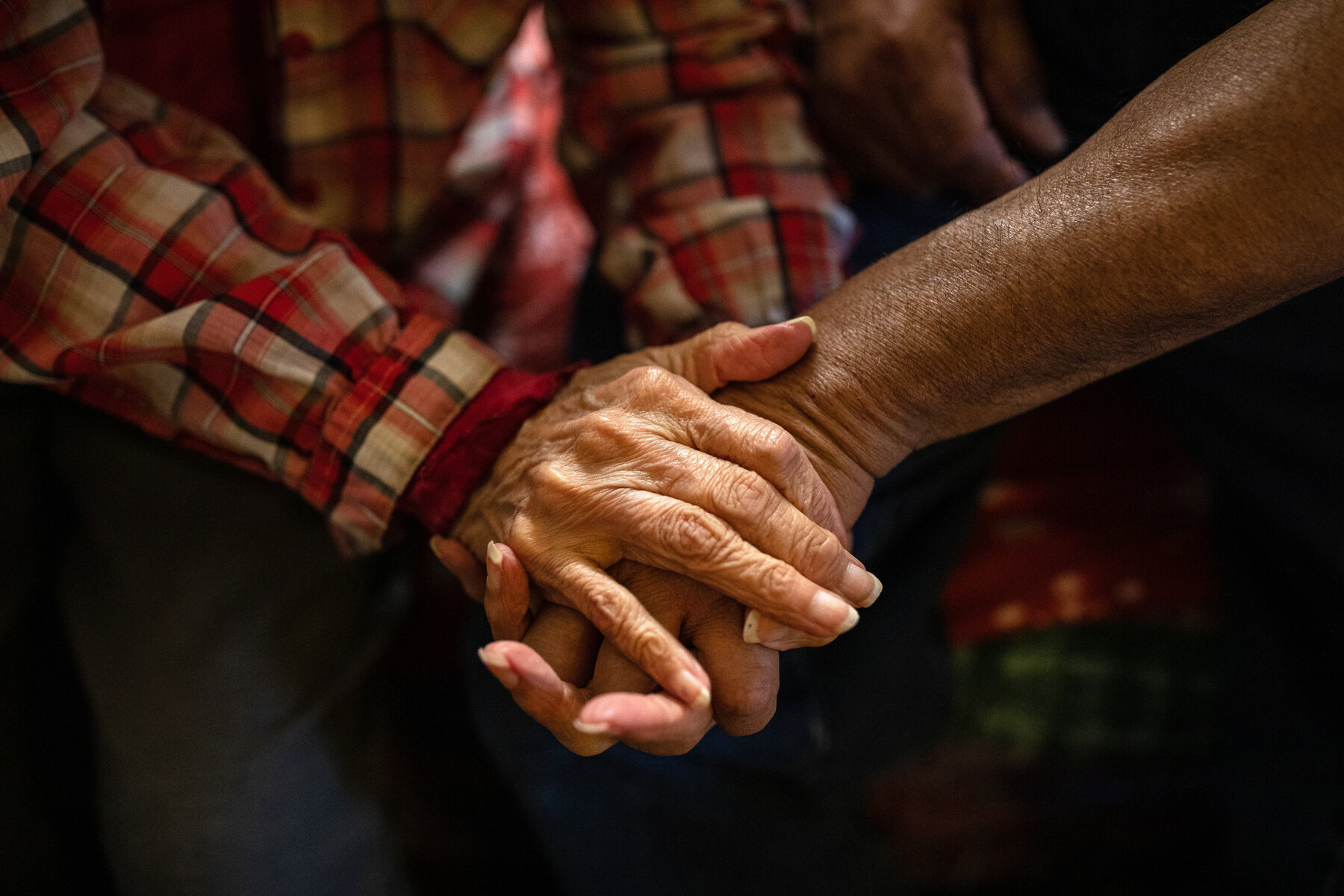 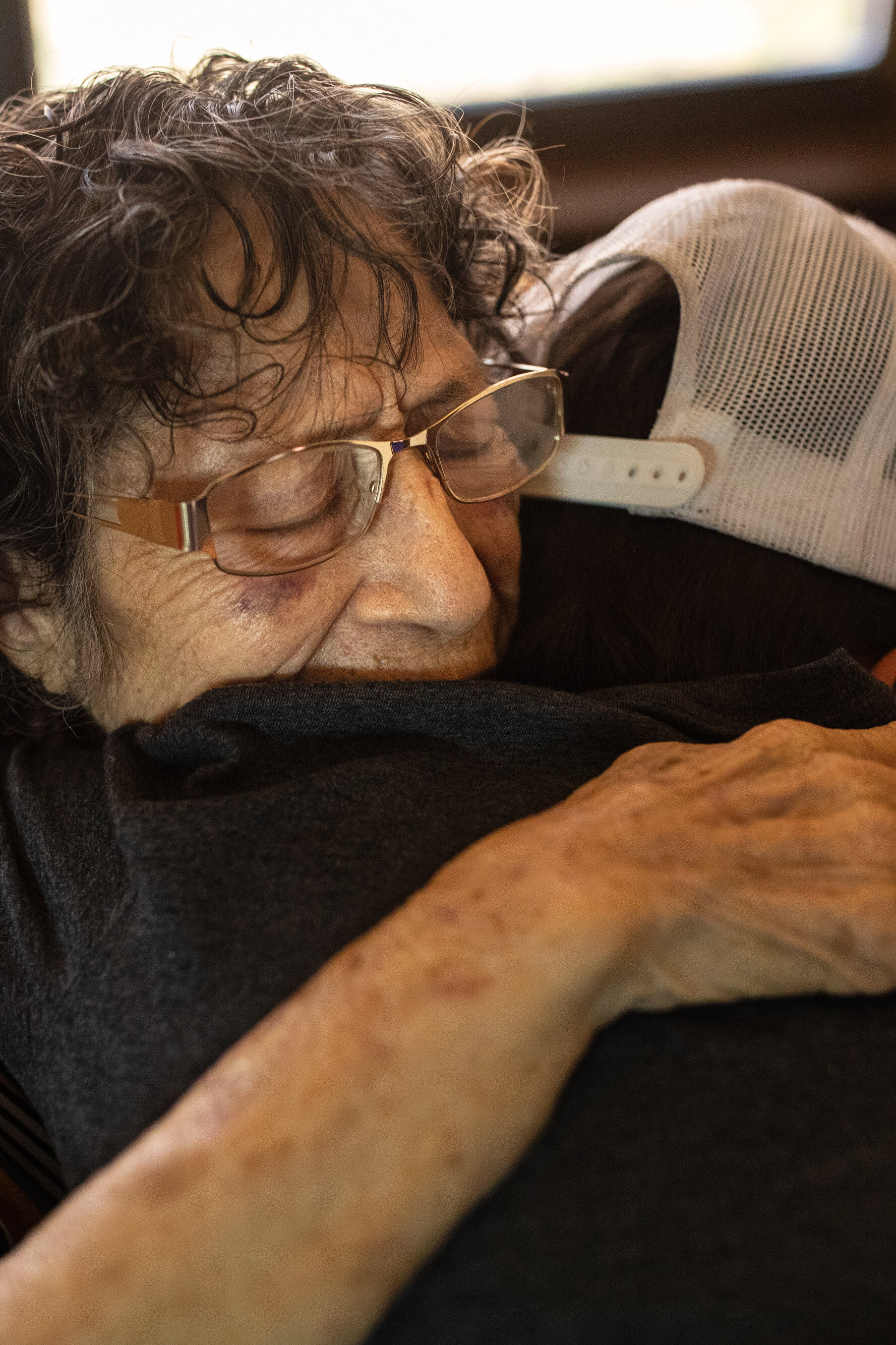 They saw each other and wept.

How to begin to say “I love you” after a year?

Together Again: Documenting Nursing Home Reunions After One Long Year

The pandemic kept nursing home residents and their families apart. Photographers for The New York Times were there when they finally reunited.

A daughter holding her mother’s hand. A son overcome that his 95-year-old mother survived the pandemic. A stoic family patriarch, suddenly in tears.

After a year of excruciating lockdowns, these were the scenes at nursing homes and other long-term care facilities as they began to open up this spring. Before the arrival of vaccines, one in three coronavirus deaths in the United States had ties to nursing homes and similar facilities.

The New York Times sent photographers across the country to document the reunions between family members. For many, it was the first time they were able to be together, hold hands and hug in more than a year.

In interviews, which have been edited and condensed for clarity, families recalled a deep fear that they would never see their loved ones again. When the time finally came, they were flooded with a year’s worth of emotion in a single instant: joy, relief, love — and grief for all the time that had been lost. 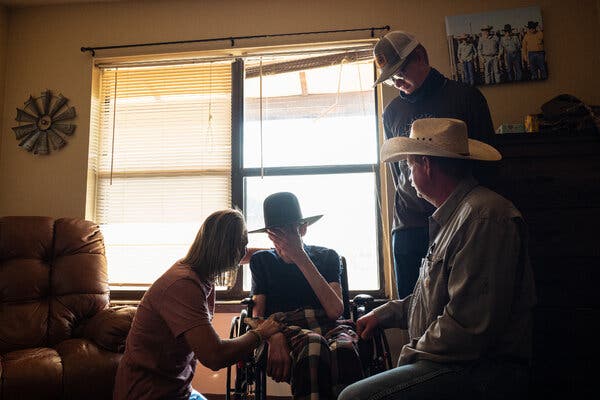 Jim Tinkler, 84, has been a resident at Focused Care at Fort Stockton in West Texas since 2018. During the pandemic, his wife, who had also lived at the facility, died after a battle with Parkinson’s disease. Their family could not visit before her death. This month, Mr. Tinkler reunited with his son, Wayne Tinkler, 48, daughter-in-law, Beverly Tinkler, 53, and grandson, James Tinkler, 15, for the first time in more than a year.

BEVERLY TINKLER: I was the first to walk into the room. He looked up and saw me and just immediately put his head down and started crying. I went up and gave him a hug. It was very overwhelming, just the joy of seeing him again. He would just take Wayne’s hand and hold it and start crying, and then the same thing with James. I’m sure he felt that he had been abandoned. I don’t know that he understood why we couldn’t come, just that we quit coming.

WAYNE TINKLER: They were in separate rooms, because of my dad’s dementia and my mother’s Parkinson’s. But they were right across the hall from each other, and he would typically go down there most every day. My mom passed away Jan. 29. We did have a funeral for her, a graveside service, but my dad was locked down at the nursing home. My main concern was he wouldn’t know us when he finally saw us. It was really good that he knew who we were. Just him knowing that we were there, that we were back, was a huge relief.

Con Yan Muy, 93, has been a resident at the San Francisco Campus for Jewish Living nursing home since 2019. Anita Li, 24, grew up with her grandmother and previously visited daily. For a year during the pandemic, she saw her grandmother only a handful of times through a window or at a distance. Even now, her visits remain limited, as is the case at many facilities.

ANITA LI: I was hiding in the bathroom when she came in. It was a surprise. She didn’t recognize me initially because I had my mask on. I am going to be honest, I was kind of sad. I am one of the most involved persons in her life, and she couldn’t recognize me. I immediately just started patting her legs and her arms for better blood circulation. I had brought some dumplings and also brought her some sesame balls that she really enjoys. We made a video for the rest of the family for her to say hi.

It’s like a sigh of relief that we could finally be together, but also knowing that this was a one-time thing, and not really sure what the future holds. Am I going to see her every week face to face? Can I eventually take her out on walks where she can get some sun? What is the new normal, and how much can we be involved in her life post-quarantine? 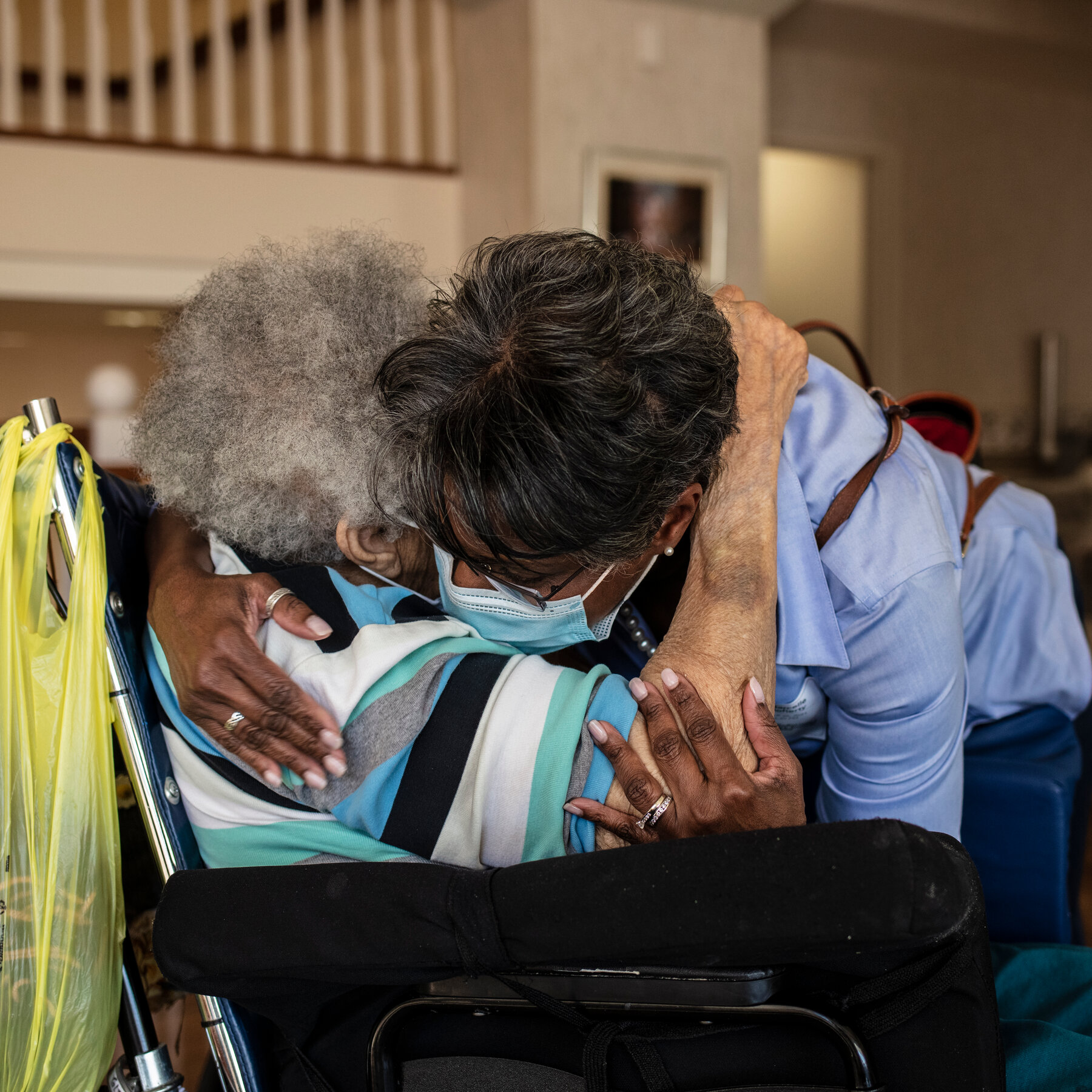 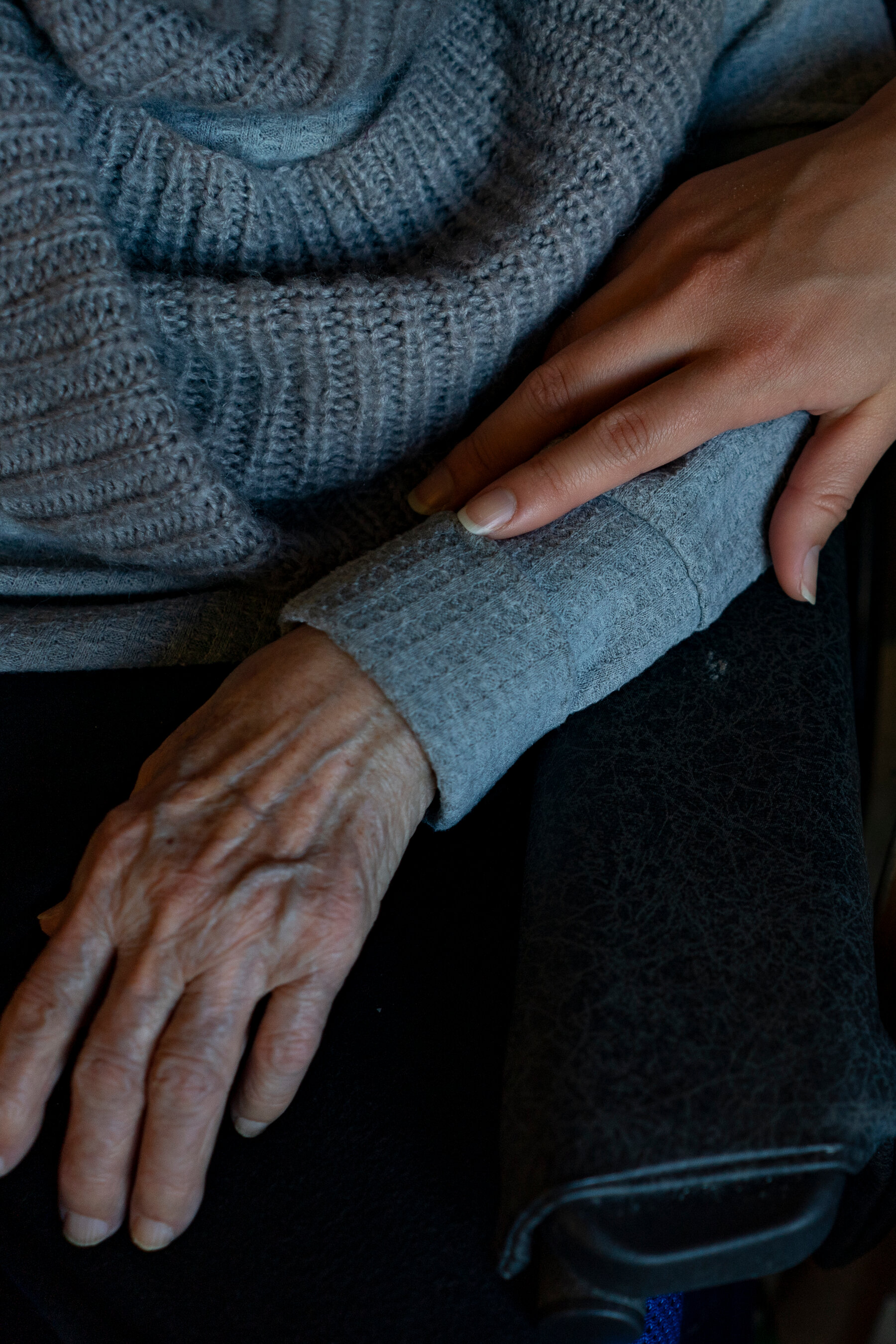 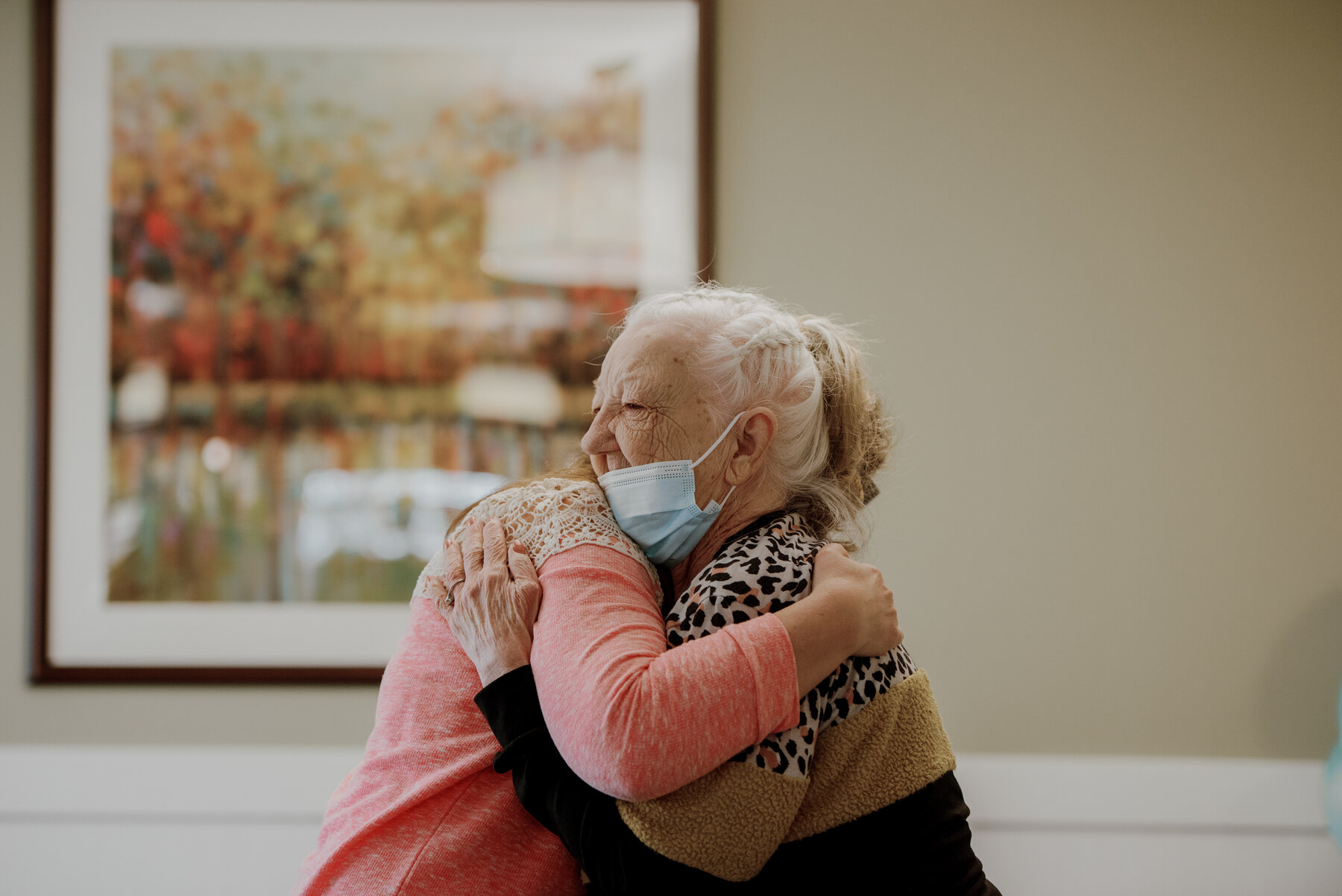 They carried with them their worries and their grief.

For a year, the question haunted them: Would their loved ones make it to the other side of the pandemic?

Marie Fabrizio, 95, has been in assisted living at Reformed Church Home in Old Bridge, N.J., since 2017. During the pandemic, she saw her family for limited visits through a window or outdoors at a distance. When her son, Dan Fabrizio, 59, surprised her with a visit last month, it was the first time they had been able to embrace in more than a year.

MARIE FABRIZIO: Of course I miss my family. It’s lonely. Thank God, I have friends who are here. We play bingo. We have arts and crafts. Seeing my son, it was a surprise. I was crying, and he cried with me. It was such a beautiful feeling. I didn’t want him to leave. It’s hard to let go.

DAN FABRIZIO: It was like a year in review — all the things that went through my mind in the past 14 months. Thinking, what if my mom passed away? Thinking about the things we wish we could have done, the things we sacrificed. We have a beach house down at the Jersey Shore. I take her down personally three times a year — Memorial Day, July 4 and Labor Day. Thinking that she would not have had that chance, and just being hopeful she has the chance to do that this summer. Hearing my mom’s voice in person — it just felt like, it wasn’t a recording. It wasn’t the telephone. It wasn’t a Zoom. It was live. She got through this. I sat in my car, and I cried.

Catherine O’Mahoney, 82, came to ArchCare at San Vicente de Paúl in New York City in 2015 after a cancer diagnosis. Because of the pandemic, Carolyn Austin-Tucker, 62, had not seen her mother in more than a year until they were approved for a visit this month.

CAROLYN AUSTIN-TUCKER: She looked beautiful. She had her new glasses on. They did her hair. She had a beautiful beige lace top on. I brought her lo mein with extra shrimp, Lorna Doone cookies and a ginger ale. She smiled a lot. She laughed a lot. She was happy. The dominant emotion was happiness, to see her well, looking good. I was a little saddened because I realized the year that we missed. Aging is a process, and every moment is precious. The whole reality set in. We missed all of that time. We were happy to see each other, but it was bittersweet. 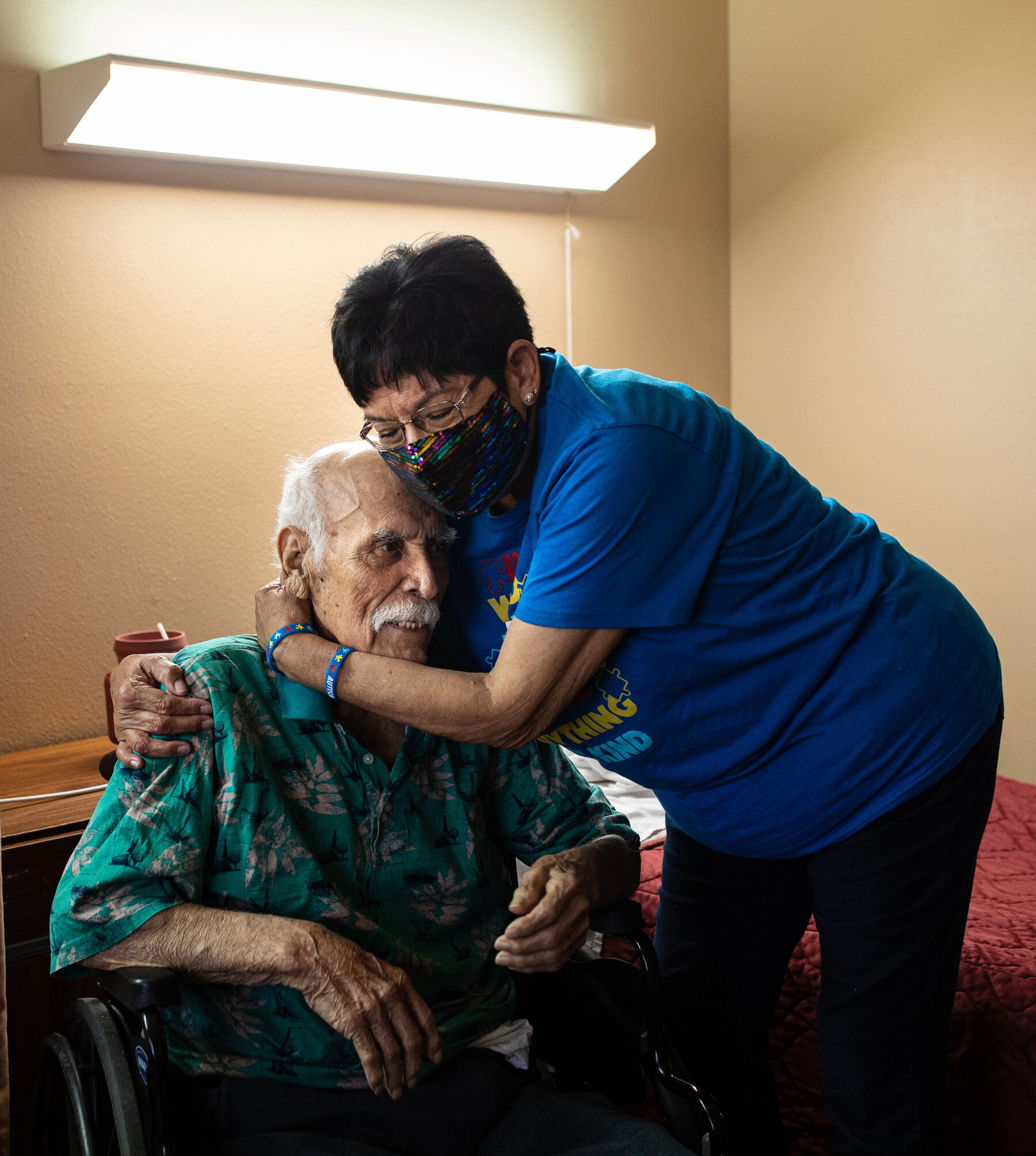 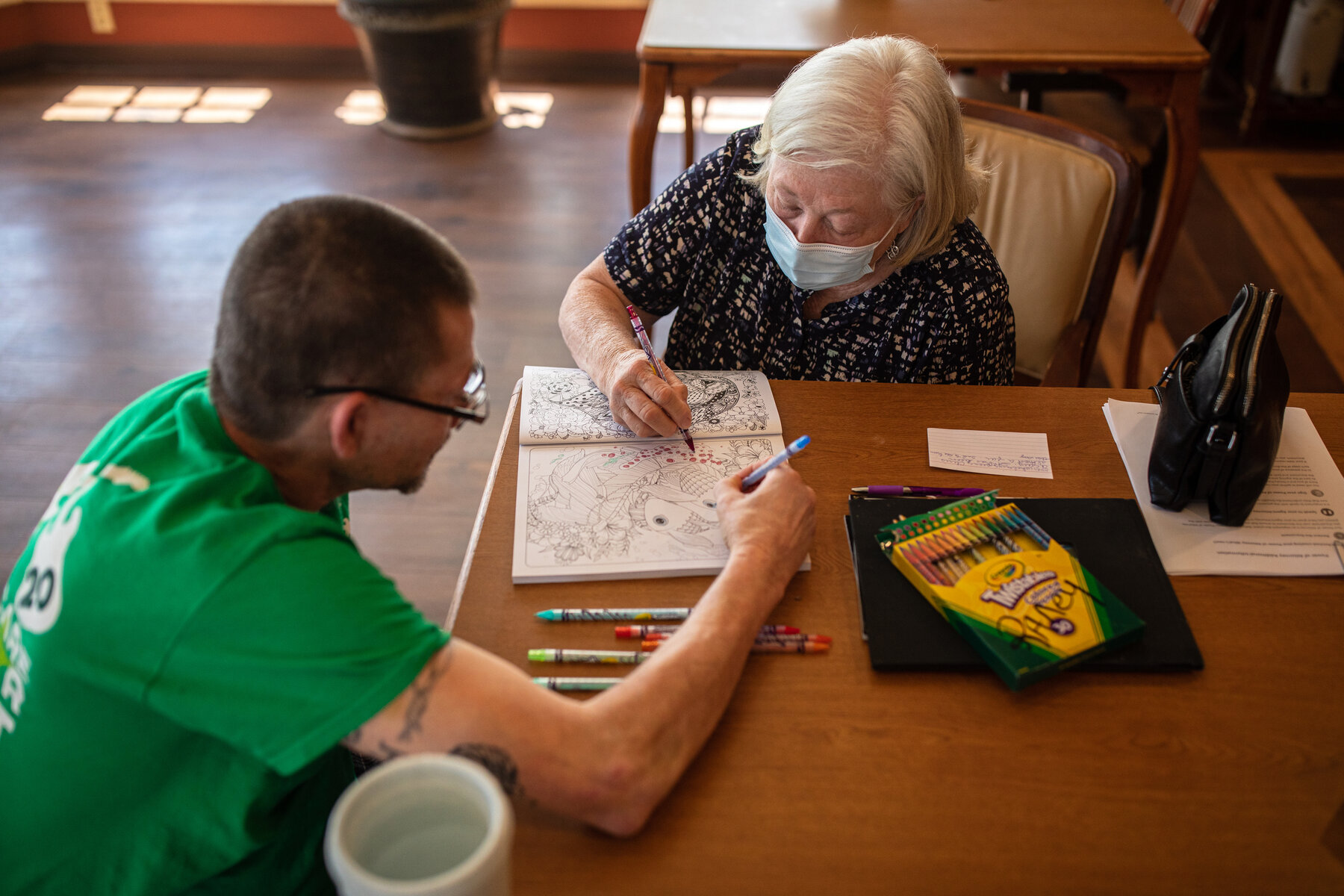 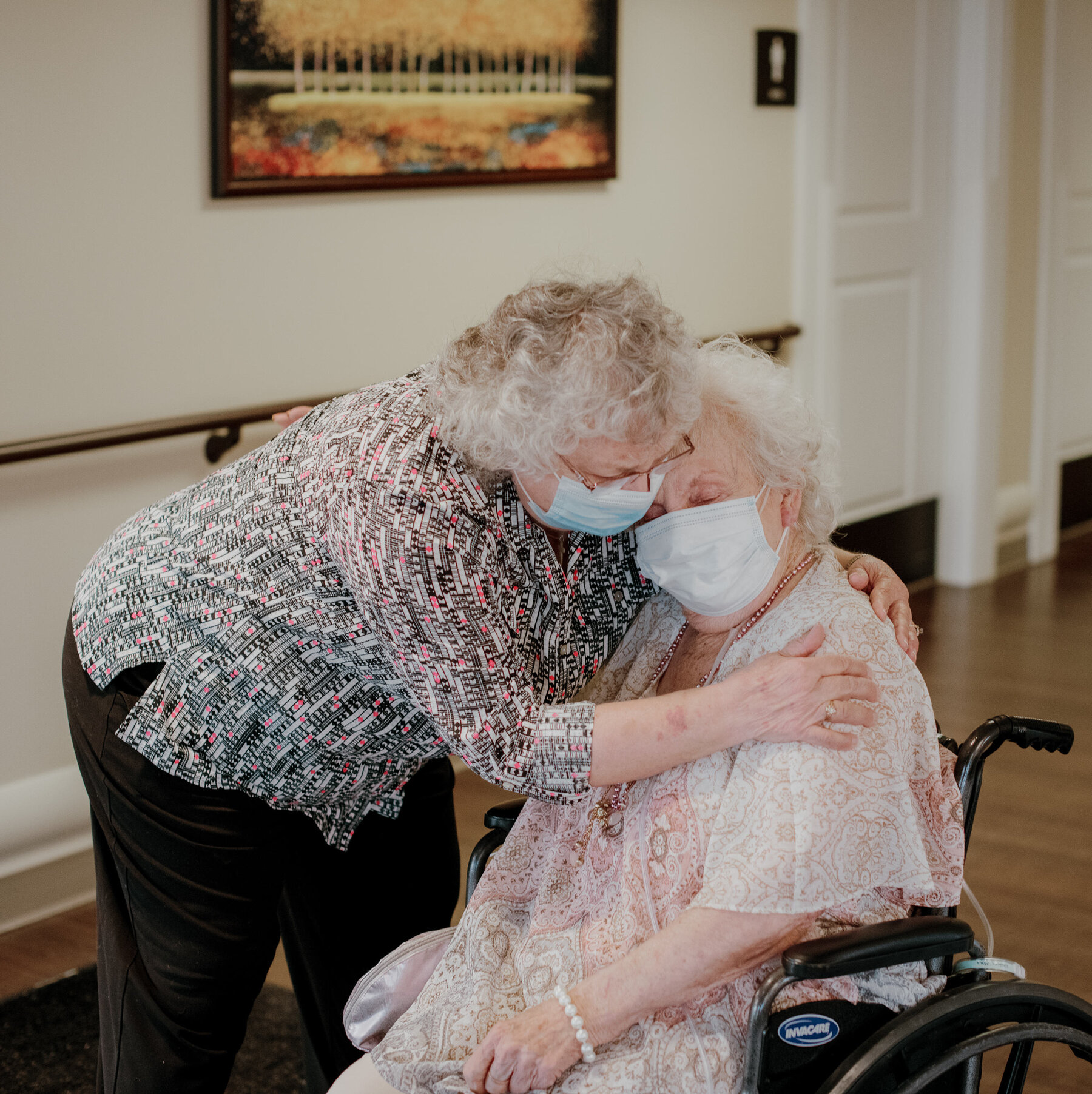 For many families, the joy of reuniting has been like balm on a deep wound.

… but just the beginning of a long recovery.

Dolores Hiwiller, 90, has been living at Quality Life Services – Sugar Creek in Worthington, Pa., since 2018. Before the pandemic, her daughters Karen King, 67, and Sue Shirey visited their mother multiple times a week. Aside from window visits, it had been a year since they had seen each other in person.

DOLORES HIWILLER: I didn’t see them in person at all. Only through a window. I missed touching the most. Holding. It was pretty awful. I took one day at a time. That’s all I could do. With the help of the Lord, I made it through each day. When I could finally see them, that was a very wonderful day. It’s like we had gotten through the worst that there was. We had made it.

KAREN KING: It was from March of 2020 through March of this year. She would occasionally have panic attacks. I’m a psychologist. My job was to to calm her down. And then she got Covid. It was scary. I thought we were going to lose her. The first day, we didn’t know we were going to be allowed to touch her. My mother and I are not “hug me all the time and give kisses.” We were brought up in a German family — we got a pat on the shoulder. But just being able to touch her, I was crying. I cried the whole way home. I didn’t know how much I had missed it until I got it back.

Warren Young, 64, came to the Marigold At 11th Street, an assisted living facility in Washington, D.C., about seven years ago after suffering a stroke and heart attack. In this case, it was his mother, Lucille Young, 87, who had been waiting to visit her son.

LUCILLE YOUNG: I used to come and visit him almost every weekend. We’d sit and talk, laugh about old times. The pandemic happened, and that was it. It was pretty hard for me not being able to see him, being a mother.

WARREN YOUNG: This past year has been a nightmare. You can’t go out, go walking, do things for yourself. You can’t associate with family. I liked Sunday dinner. She’d come over on Sunday and drop dinner off before going to church. We’d sit and talk and watch TV. During the pandemic, I waved from the window and talked to her on the phone. You miss some things when you don’t get to do them, you know? I missed my mom. This is the lady that raised me, birthed me, took care of me. From a distance is all right, but it’s not like that personal touch.

Hacenet Garcia carrying an orchid, a gift from her daughter, back to her room in Old Bridge, N.J.Credit…Bryan Anselm for The New York Times
EtiketlerHadİtSeeSheTi̇me