WASHINGTON — If this were a normal year, Representative Steve Cohen, Democrat of Tennessee, might have spent hours leading up to President Biden’s first address to a joint session of Congress camped out in the House chamber among a small but determined tribe of lawmakers known as “aisle hogs.”

Their goal, on one of Washington’s biggest nights, is usually to score the handful of seats smack in the middle of the political mosh pit best positioned for shaking hands with the president — and being seen on national television — as he parades in and out. Mr. Cohen, an avid sports fan, once even got President George W. Bush to sign a Memphis Tigers hat on his way down the aisle.

But on Wednesday morning, as congressional leaders prepared for a very abnormal pandemic-era speech, neither Mr. Cohen nor any other lawmaker was anywhere in sight. House leaders had locked the chamber shut, blocked off coveted aisle seats to prevent crowding and drastically slashed attendance to about 200 people, from the usual 1,600.

Those without tickets were urged to stay far away as the Secret Service and National Guard members placed the Capitol on a secure lockdown for the first joint session of Congress since Jan. 6, when a pro-Trump mob stormed the building and sent lawmakers fleeing for their lives.

The tableau was “a little strange,” Mr. Cohen allowed, “but then the whole presidency has been strange.” Mr. Cohen stayed home and watched on TV instead.

For those watching from afar, Mr. Biden’s first State of the Union-style speech proceeded more or less as normal on Wednesday, with formal announcements of the president’s arrival, congressional leaders escorting him and a long address delivered from the walnut rostrum in front of a large American flag. But inside a Capitol still reeling from the Jan. 6 riot and hobbled by strict pandemic protocols, one of Washington’s most recognized rituals unfolded almost as if on mute.

There were no candlelight dinners for senators and their spouses or cocktail receptions for House members and their guests. Instead of passed hors d’oeuvres, Speaker Nancy Pelosi distributed boxed dinners to the 40 or so House Democrats allowed to attend from her Capitol office suite. Statuary Hall, converted most years into a raucous, marble-columned spin room, sat empty and quiet for most of the day.

İlginizi Çekebilir;  How to Help India Amid the Covid Crisis

Inside the chamber, where most years lawmakers frequently drown out the president’s speech with thunderous applause, the new president stared out at a socially distanced crowd so sparse that snippets of commentary could be heard across the room during lulls. Besides lawmakers, outside attendance was limited to Ambassador Hersey Kyota of Palau, the dean of the diplomatic corps; Chief Justice John G. Roberts Jr.; Gen. Mark A. Milley, the chairman of the Joint Chiefs of Staff; Jill Biden, the first lady; the secretaries of defense and state, Lloyd J. Austin III and Antony J. Blinken; and a couple of dozen members of the press. 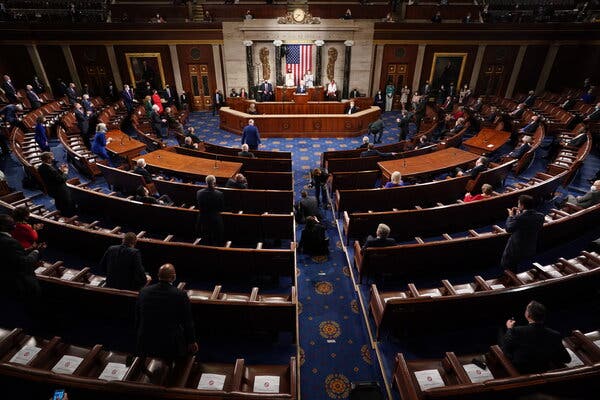 Those who were allowed to attend were instructed to wear masks to guard against spreading the coronavirus, and they sat with several empty seats between them. A few members still managed to grab a quick fist bump or handshake as Mr. Biden entered, including Representative Liz Cheney of Wyoming, the No. 3 Republican who is embattled in her own party for having voted to impeach former President Donald J. Trump.

“People can’t see if you’re scowling or smiling — they just can still see if you’re sleeping, unfortunately,” Senator John Thune of South Dakota, the No. 2 Republican, told reporters. He deemed it “a very unusual, I think, experience for everybody.”

The carefully controlled calm papered over many of the divisions and wounds still festering from the last joint session, when thousands of supporters of Mr. Trump violently overpowered the police and broke their way into the building as Congress met to officially count the 2020 electoral votes.

Mr. Biden strode into the chamber through the same doors law enforcement officials barricaded, guns drawn, as the rioters bore down. Some of the same lawmakers who voted to overturn his victory were seated inside, underscoring how badly divided Congress and the country remain 100 days into his presidency.

Still, Mr. Biden, a 36-year Senate veteran, went out of his way to show his ease in the Capitol, joking that he was “almost home” being back in the building and twice calling out Senator Mitch McConnell, Republican of Kentucky and the minority leader, by his first name.

Democratic leaders, eager to promote Mr. Biden’s first 100 days in office and ambitious jobs plan, spent the day trying to gin up some of the typical hubbub. Ms. Pelosi went on cable news to point out that history would be made later in the evening when she and Vice President Kamala Harris took their seats directly behind Mr. Biden. Never before have both the speaker of the House and the vice president been women.

When the moment came, the two women bumped elbows, and Senator Patrick J. Leahy, Democrat of Vermont, captured the historic moment with his digital camera.

Republicans fired off news releases condemning Mr. Biden’s plan, accusing him of having abandoned his pledge to unite the country in favor of liberal priorities. For many of them, the strict limit on attendance was a welcome excuse to skip a stuffy evening at work pretending to listen to a president whose policies they loathe.

But others insisted on being there, arguing that the democratic process worked best when the opposing parties could meet face to face.

“The best way to critique him is to show up and directly hear what the president has to say,” said Senator Dan Sullivan, Republican of Alaska.

Senator Tim Scott of South Carolina, who was tapped by Republican leaders to deliver their formal rebuttal to Mr. Biden’s speech, was characteristically calm as he flitted around the Capitol between prep sessions. His regimen for the big night: “Lots of ice cream and cookies and sitting on the couch, hanging out a little bit.”

İlginizi Çekebilir;  Navalny’s Group Is Shutting all Its Offices in Russia
Guests, lawmakers and members of the news media were required to pass a health screening before entering the Capitol.Credit…T.J. Kirkpatrick for The New York Times
Representative Tom Cole, Republican of Oklahoma, received a wristband after completing the Covid-19 health screening.Credit…T.J. Kirkpatrick for The New York Times

The sparse numbers may have been for the best. Security was tight for visitors trying to get through the ring of fencing that has encircled the Capitol building since the January attack and the thousands of National Guard troops patrolling the perimeter. And though the architect of the Capitol moved a metal detector installed outside the House chamber to spare Mr. Biden the indignity of passing through it, other attendees were funneled through secure checkpoints.

Between the added layers of security and health protocols, there was no room for the usual crowds of guests invited by the president, the first lady and members of Congress to sit in the chamber. Representative Katherine M. Clark of Massachusetts, the No. 4 House Democrat, was among those who invited a guest from her district to join her virtually instead, an experience she conceded was nothing like the thrill of being physically present in the Capitol.

“It’s a good refresher of how incredible it is to work in this building, to see these iconic figures that you work with and get used to, when you see it through someone’s eyes, like a guest,” she said.

The few lawmakers who got to attend in person got more access to the president than even the most ambitious aisle hogs do in normal years. After Mr. Biden ended his speech and the applause had subsided, he lingered as he made his way out of the chamber. As Democrats and a few Republicans swarmed him and snapped photos, the president offered fist bumps and leaned in for quiet conversations, savoring his final moments in the chamber even as his security detail urged him onward.

Roses were left on a statue of Rosa Parks in the Capitol.Credit…Alyssa Schukar for The New York Times
EtiketlerHouseNewOffSenatorWho