WASHINGTON — President Biden’s $4 trillion economic agenda might have seemed unthinkable as the United States was emerging from its last recession, when austerity politics still ruled the Capitol and even a Democratic president was reluctant to push huge tax increases on corporations and the rich.

But Mr. Biden has a significant chance of signing at least a large chunk of his plans into law this year, partly because of a pandemic that reminded many Americans that big government could deliver money to help sustain them and speed efforts to end the crisis faster.

What the president is promising from the government in the years to come is a long list of tangible improvements in Americans’ daily lives: smoother roads, cheaper child care, cleaner and more reliable electricity, more years of free schooling for toddlers and young adults, paid leave for workers whose lives are upended by illness and faster internet service in rural areas and elsewhere.

Those sweeping spending plans, which Mr. Biden was set to make the centerpiece of his first address to a joint session of Congress on Wednesday, would be paid for by raising $4 trillion in tax revenue from high earners and corporations. While Republicans have begun complaining about that price tag, they have yet to galvanize a public backlash like the Tea Party movement that engulfed President Barack Obama’s administration a few months after he took office in 2009.

Analysts say there is an obvious difference this time: Before Mr. Obama entered the White House, lawmakers approved a nearly $1 trillion effort to bail out Wall Street. Before Mr. Biden took office, Washington was sending money to nearly every person in the country — and those people noticed.

They also saw, in the depths of the coronavirus pandemic, a stark reminder of longstanding inequalities and fragility in the American economy.

“The scope of the crises that we’re living through has kind of refocused the country on the ways in which we failed each other over a long period of time and how close to the edge that has brought us,” said Cecilia Muñoz, who was the director of the White House Domestic Policy Council under Mr. Obama and is now a senior adviser at New America, a policy organization in Washington.

“We’ve learned a lot from this crisis,” she said, “which has helped the country get more serious about the things we need to fix.”

Some of those lessons centered on government spending to combat a rapid recession and deadly virus. Under President Donald J. Trump, lawmakers last year approved more than $3 trillion in spending to help people and businesses survive until the economy improved and millions of jobs began to return. The Trump administration sped production of vaccines. and Congress sent direct checks to households, paid out hundreds of billions of dollars to small businesses and drastically expanded the social safety net to help Americans stay in their homes and put food on the table.

İlginizi Çekebilir;  At 100 Days, Biden Is Transforming What It Means to Be a Democrat

“This is what happens when government actually works for people: There’s no backlash,” said Jon Lieber, a managing director for the Eurasia Group in Washington who was a former aide to Senator Mitch McConnell of Kentucky, the Republican leader. “The dynamic is so different now, because the response during the crisis was more populist, more people-focused.”

Mr. Biden was set to echo that sentiment in his speech, according to excepts the White House released in advance on Wednesday afternoon. 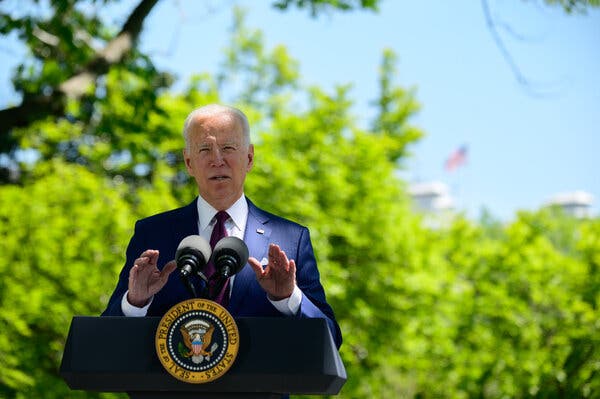 “We’re vaccinating the nation,” the president was prepared to say. “We’re creating hundreds of thousands of jobs. We’re delivering real results people can see and feel in their own lives. Opening the doors of opportunity. Guaranteeing fairness and justice.”

Mr. Biden will use his speech to outline the final plank of the economic agenda he unveiled this year: a nearly $6 trillion effort that includes the pandemic relief bill and a $2.3 trillion physical infrastructure package.

The final proposal, which the president calls the American Families Plan, includes $1 trillion in new spending and $800 billion in tax credits, much of which is aimed at expanding access to education and child care. It features money for universal prekindergarten, a federal paid leave program, efforts to make child care more affordable, free community college for all, aid for students at colleges that historically serve nonwhite communities, expanded subsidies under the Affordable Care Act and an extension of new federal efforts to fight poverty.

Many of the provisions, like tax credits to help families afford child care and an expansion of a tax credit meant to fight child poverty, were included as temporary measures in Mr. Biden’s pandemic relief package. The new plan would extend one of the provisions for several years and make many others permanent, at an estimated total cost of $600 billion.

To offset the cost of the proposal, Mr. Biden would raise taxes on high earners, including on investment income for millionaires. He would also plow more money into the I.R.S. to help crack down on high earners and corporations that evade taxation.

Republicans have blasted the proposed tax increases and have little appetite for most of the president’s spending plans, though a group of Senate Republicans is trying to negotiate an infrastructure bill with the White House. But conservatives have struggled to make their attacks on Mr. Biden’s spending stick with the public. They mounted new efforts this week, accusing him of pushing a pandemic relief bill that was unrelated to the coronavirus and an infrastructure plan that had little to do with “real” infrastructure.

“I think it’ll catch up once it all sinks in,” said Senator Mike Braun, Republican of Indiana, who added that he believed Mr. Biden was overreaching with voters.

“People are fed up with this,” said Senator Rick Scott of Florida, who heads the campaign arm for Senate Republicans leading into the 2022 elections.

Those attacks do not seem to carry the same sway that they did during Mr. Obama’s tenure, when the White House proposed a much smaller economic stimulus package than many economists thought was warranted given the huge erosion in household wealth after the financial crisis. Mr. Obama did raise taxes on high earners, including to help fund the Affordable Care Act, but not at a scale close to what Mr. Biden is proposing.

Mr. Biden may have Mr. Trump, in part, to thank for that shift. The pandemic aid bills he signed last year, with bipartisan support in Congress, might have helped reset the public’s views of Washington’s spending limits; “trillion” was a red line of sorts under Mr. Obama, but no longer.

In Washington, the president does not need Republican support to push through his agenda. He needs only his party to hold together in the House and the Senate, which Democrats enjoy majorities by thin margins, and move as much spending and tax policy as possible through the process known as budget reconciliation. The maneuver bypasses Senate filibusters and allows legislation, like Mr. Biden’s relief bill this year, to pass with only majority-party votes.

That process will give large sway to moderate Democrats like Senator Joe Manchin III of West Virginia, but so far that group has not flinched at the scale of Mr. Biden’s ambitions. Mr. Manchin has said he will support $4 trillion in infrastructure spending.

It is unclear if Mr. Biden can hold Mr. Manchin and others on his people-focused spending, like the education and child care efforts unveiled on Wednesday. His administration is trying to make the case on productivity grounds, casting the plan as investing in an inclusive economy that would help millions of Americans gain the skills and the work flexibility they need to build middle-class lifestyles.

Economists, especially on the left, have been making similar arguments for years: that money to help children escape poverty, adults go back to school or parents afford child care would unleash a boom in work and economic output. Amid the pandemic, the White House sees an opening to follow through on them.

“A lot of the ideas that are in this package are ideas that policy activists and labor economists have been talking about and writing about for years and years,” said Melissa S. Kearney, an economics professor at the University of Maryland who directs the Aspen Economic Strategy Group. “It’s pretty exhilarating to see the president pushing them forward right now.”

“People had this hope that we would emerge from the pandemic stronger,” she added, “and maybe that’s what’s happening.”