After she got divorced in 2015, Sonia Medeiros, 48, knew she had to earn a college degree. She needed to support herself and her young son, but employers were not responding to her résumé, which showed only a high school education from her native country, Brazil.

The coronavirus pandemic made everything worse. She lost her job in food services and sometimes struggled to afford groceries, rent and car insurance payments. She could not look for new paid work, she said, because her 13-year-old son’s school shut down often because of virus cases. Throughout, her federal Pell grant to pay tuition at LaGuardia Community College in Queens, where she is studying nutrition and culinary management, was an essential source of stability.

There are more than five million students, many of them from low-income families, enrolled at the nation’s 1,000 community colleges. Like Ms. Medeiros, many of them stand to see a considerably strengthened lifeline to the middle class in the sweeping higher education provisions in President Biden’s $1.8 trillion American Families Plan.

The proposal calls for community college to be free for all Americans. For low-income students like Ms. Medeiros, that would free Pell grant money to be spent on the living expenses that prevent many from completing degrees.

“It’s very tough,” Ms. Madeiros said of her financial reality as a single parent and student. But the Biden plan, she said, “would be very helpful” in helping her finish her degree and find a full-time job with benefits. 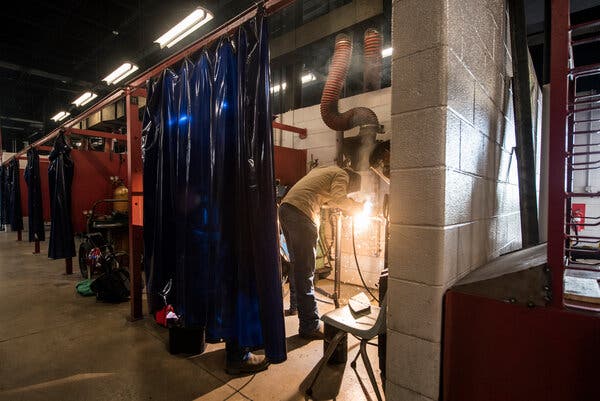 Landon Mueller welding during a class at Forsyth Technical Community College in Winston-Salem, N.C.Credit…Caitlin Penna for The New York Times

Proponents of the idea say it will relieve some of the burdens saddling low-income and working-class college students, many who struggle to cover tuition costs while at the same time paying for rent, food and other basic needs. Juan Salgado, chancellor of the 70,000-student City Colleges of Chicago system, said that by providing some free secondary education, Mr. Biden’s plan would bring education into the 21st century.

İlginizi Çekebilir;  The Wind and Solar Boom Is Here

“At the very top-line level, what I like about it is the recognition of our students and the impact that our students have and can continue to have on the growth of our economy and the betterment of our communities,” Mr. Salgado said.

But critics question whether it makes sense to infuse public two-year colleges with so much federal funding, saying that many low-income students perform better at four-year universities. Others point out that community college is already free or low cost in many states.

Beth Akers, a higher education expert at the center-right American Enterprise Institute, said an alternative approach would have been to send the dollars to students to spend at the institutions of their choice. The Biden plan, she said, “is sort of an experiment in more socialized education after high school, and it will be interesting to see how it works.”

Mr. Biden planned to lay out the proposal in his first address to a joint session of Congress on Wednesday night. Funded in part by increased taxes on the wealthy, the plan includes more than $300 billion in expenditures for higher education, aimed primarily at community college students as well as those attending historically Black colleges and universities.

Students like Ms. Madeiros would also benefit from many of the other provisions in the American Families Plan, such as child care subsidies, free preschool and tax credits.

The centerpiece of the higher education proposal provides $109 billion to fund free community college for all, with the Biden administration estimating that it will benefit up to 5.5 million students, many who face economic barriers to obtaining a degree.

Jill Biden, the first lady, is a community college professor and has long been a proponent of increased funding for community colleges and has been promoting the idea in visits around the country.

İlginizi Çekebilir;  ‘Taxilandia’ Review: The Mouth is Running, but Not the Meter

While generally consistent with Mr. Biden’s campaign blueprint, the proposal omits any reference to erasing college debt, a move promoted by a number of congressional Democrats, some who want to forgive $50,000 in federal student loans for many borrowers. The president had partially endorsed the idea during last year’s presidential campaign, proposing $10,000 in loan forgiveness.

Although the plan makes community colleges free for everyone, they have generally served working-class students. Many of those students had trouble remaining in school even before the pandemic, juggling their own academic work with financial pressures and child care needs. The average age of community college students is 28, and many of them have their own families.

The proposal would also devote an additional $85 billion to low-income students eligible for federal Pell grants, which are currently capped at $6,495 per student a year. Mr. Biden’s plan would raise that by $1,400 a year, the first step to meeting his promise to double the maximum Pell grant during his administration.

Sara Goldrick-Rab, a professor at Temple University who studies the financial difficulties facing students, called the proposal a necessary and long overdue effort.

“The evidence is very clear — making community colleges free and increasing financial aid will increase college attainment, especially for people now being left behind in this economy,” Dr. Goldrick-Rab said.

Among its other provisions, the plan would set aside $39 billion to subsidize two years of tuition at historically Black four-year colleges and other minority-serving institutions.

The money, which would be available to students from families earning less than $125,000, is designed as a kind of counterbalance to make sure federal community college funding does not siphon students to community colleges who would otherwise have attended one of the minority colleges.

The president is also proposing $62 billion to finance college retention programs, including money for emergency grants, day care for the children of college students, and mental health services. Three in five students who begin college receive a degree, with even lower results at community colleges.

Mr. Salgado, whose system lost about 12 percent of its students during the pandemic, particularly applauded the proposed funding aimed at retaining students. “You have to understand that success with students requires more than just tuition support,” he said.

The plan includes so-called Dreamers, making the group of undocumented immigrants who were children when they entered the United States eligible for assistance.

The proposal would drastically alter the way community college is paid for by creating federal-state agreements — with the federal government kicking in $3 for every $1 paid by participating states.

The plan, which borrows from a proposal by President Barack Obama, dovetails with updated bills filed on Wednesday by Representative Robert C. Scott of Virginia and Senator Patty Murray of Washington, chairs of the House and Senate education committees. One of the bill co-sponsors, Representative Andy Levin of Michigan, called the president’s proposal “bold” in its reforms.

Seventeen states already offer some type of free community college, generally for low-income students, by augmenting federal Pell grants. Because community college costs vary from state to state, details of carrying out the plan could be tricky to work out. It is also unclear whether all 50 states would buy into the expansion.