For the 250th anniversary of Beethoven’s birth, the classical music field pulled out all the stops last year, even in the midst of pandemic performance cancellations around the world. But while 2021 brings its own significant anniversary — in August it will be 500 years since the death of Josquin des Prez, the most influential composer of his age — few listeners will know it.

At the center of his body of work are 18 grand, unaccompanied choral masses — exactly the kind of music that will be largely forbidden for some time yet for fear of aerosol transmission of the virus. Those masses are the major legacy of the man Peter Phillips, the founder and director of the renowned vocal ensemble the Tallis Scholars, called a “magician-mathematician” in a recent interview.

Josquin indeed wedded the logic of math to the magic of melody, and his compositions feel like they unfold with both perfect clarity and atmospheric strangeness. Shining and austere, with the gentle radiance of a shaft of sunlight beaming through a window, Josquin’s music weeded out extraneous, extravagant ornamentation; he created textures of polyphonic complexity that are still smooth and free.

His works feel unified because they are organized around small melodic fragments that gradually develop as they are passed from voice to voice. This might seem like a description of, well, all music. But the notion of carrying a melodic “cell” through a whole work was unknown before Josquin’s time, and he was one of the most gifted experimenters with the concept. 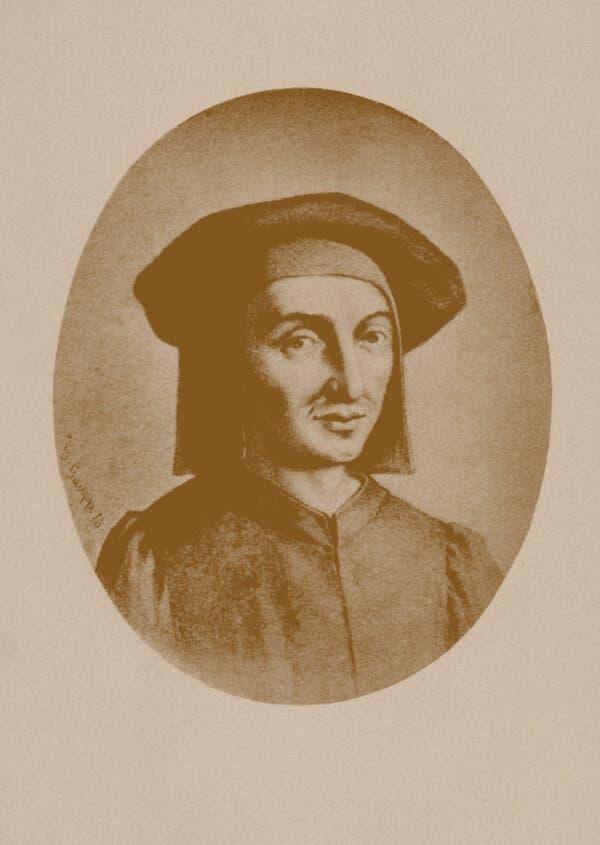 Josquin des Prez, who died 500 years ago, was the first celebrity composer, and the first to be known widely through printed scores.Credit…Fine Art Images/Heritage Images, via Getty Images

He was also one of the first celebrity composers, and one of the first to be known by the wide dissemination of his scores — possible because of the newly developed technology of printing. The earliest surviving print of music by a single composer is a book of Josquin’s masses made in Venice in 1502.

Little is known of his birth, which took place around the middle of the 15th century, somewhere near the modern-day border between France and Belgium. He eventually rose as a singer and composer, and by the late 1480s had made his way to Italy, where he worked for the Sforza family, formed his mature style and was for a period a member of the papal choir. (His only known signature is carved into the wood of the Sistine Chapel’s choir loft.)

To discuss Josquin and his significance, Phillips, who has recorded a full cycle of the masses with the Tallis Scholars and will lead them in performing those works this summer at the Boulez Saal in Berlin, joined the composer Nico Muhly, whose work is deeply informed by the choral music of the Renaissance. These are edited excerpts from the conversation.

NICO MUHLY If someone asked you in the street, “Oh, you’re Peter Phillips, I’ve always wondered who Josquin is,” what’s your answer?

PETER PHILLIPS He was the first superstar in the history of music. He was the first composer who was desired financially and artistically in the big places of the world at that time. He charged a lot, but people wanted him because he was the guy who had the reputation.

And the reason for that was, he mastered all the techniques of his time, turned them into something better, and then passed them on to the next generation of composers, who were all influenced by him. It’s like Beethoven.

MUHLY Was his stardom maintained for the last 500 years? Or did he go into obscurity before being rediscovered? I sang him as a boy chorister, but it was random motets scattered throughout the year, and he felt like more of a niche composer than a meat-and-potatoes figure.

PHILLIPS He never completely disappeared. And he was extremely famous for the hundred years after he died. Nineteen years after his death, somebody said that Josquin had written more music since he died than while he was still alive, the point being that everyone claimed his music was theirs.

One of the most surprising things I discovered recently is that on the Albert Memorial in London, opposite the Royal Albert Hall, there is a stone gallery of famous composers, the ones that a committee of English gentlemen in 1863 thought worth remembering. There are about 20 of them, and Josquin is there, next to Rossini. Schubert is not.

MUHLY What does it mean if a composer, like Josquin, sets the exact same text 30 times over and over again? Because I write a lot of choral music, I’ve done almost a dozen settings of the Magnificat, but in the more traditional parts of contemporary music, you’re kind of encouraged, if not expected, to be in a state of constant innovation.

PHILLIPS Well, that’s a very Romantic, 19th-century approach. We have to go back to what it was like in the 15th century. The words of the mass were extremely well known and Josquin set them 18 times; you can’t expect anyone to make much of every single word, every time, that often. And he didn’t; he took the words pretty well for granted.

Modern performers find that terribly hard to accept. They think they’re missing out on the one absolutely crucial thing they ought to be concentrating on — the words — when what they really ought to be concentrating on is making a good sound, so the music can come alive as music. They shouldn’t spend hours discussing the meaning of “Kyrie eleison.” In the 15th century, everyone knew what that meant.

MUHLY Something that compositionally I find so exciting about Josquin is that he is obsessively repetitive. Compared to other music of that time and in the centuries afterward, he doesn’t take a bit of music and then unspool it into this bigger thing that gets more and more ornate. It actually kind of curves back around itself, the exact same things happening.

PHILLIPS There are a lot of passages where he keeps going back to the same note. And as you say, the music doesn’t seem to advance; it just goes around. And it’s sort of a fascinating circle. He keeps hitting that note. The Amen of the Creed of the “Missa Faysant Regretz” is where he goes constantly, so constantly, back to a D, that one gets completely mesmerized by it. I mean, you become sort of crazy.

MUHLY I wonder if you could talk about what it means to have an entire body of work that’s based on previous ideas. Josquin was constantly referencing existing tunes — which, again, in the modern sense would register as being not particularly innovative.

PHILLIPS There are various levels of taking an old thing and turning it into something new. My guess is that he was keen to show he could master all the techniques that were in currency when he started and take them to a higher level. One typically show-off example of this is in the Hosanna of the “Missa Mater Patris.” He takes a motif of five notes from his model, and proceeds to quote it in every measure of the final composition — 46 of them, at every modal pitch available to him. This sounds incredibly modern, even jazzy, and it’s terrific fun to sing.

MUHLY Sometimes the original tune is, like, buried inside. So it’s less about transformation, and more about embedding, and kind of baking things into the cake.

PHILLIPS He did take some very good tunes, that’s the first thing. So, in addition to his own good tunes, he was basing his music on very good past material. But then he felt it was his job to disguise the borrowing — embedding the original material in the counterpoint, which can make it quite hard or even impossible to hear. And sometimes he elongates the note lengths so, again, you can’t really follow them. And sometimes he writes wacky canons so that the material gets all jumbled up. I mean, he’s a mathematician at heart. A magician-mathematician.

MUHLY We’re used to thinking about music of that time as being kind of austere and impenetrable. But you just peel one layer back and an enormous, enormous wealth of math turns into emotion.

PHILLIPS And the mathematics produces atmosphere. I could go on about atmosphere, because I’ve done all these 18 masses, and they all have a different atmosphere. And it’s done not by expressing the text, which remains the same, but by very clever, purely musical means with the voices, how they interact and create mood. Perhaps the most perfect example of this is in the last movement of the “Missa L’Homme Armé Sexti Toni,” where three canons overlap — one involving the “Armed Man” melody. But forget the math, and enjoy the atmosphere all that cleverness creates.

MUHLY Oftentimes people ask me, “Why do you write sacred music?” And the answer that I give is that it’s atmosphere, and that sacred music can and should be like sacred architecture, where it’s a space in which you are encouraged to look upward.

PHILLIPS If you just close your eyes and let it come to you, without any preconceptions, you stop fussing about the mathematics; they’re in there, but they do their work subliminally. When Josquin is writing a clever canon or whatever, and he’s writing the tune inside out, or upside down; that’s my favorite, when the tune comes upside down — no one can possibly hear it. But somehow you sense it.

MUHLY You can’t hear it, but I feel it’s like when you walk into a church, you can tell if someone has really thought about the structure in a very intense way, where the proportions are just so.

Something that’s so great about the Tallis Scholars is that your technical commitment to the music of that time really shows both in the foreground and the background. You can tell that everyone singing is aware of what technical stuff is going on, and aware enough to almost forget it and make music confident in that hidden knowledge.

PHILLIPS I’ve found it doesn’t need spoofing up. It doesn’t need to be sold. Just do it simply, straightforwardly, without dressing it up. No candles, no funny costumes. And let the composer speak directly. You don’t need anything else. You really don’t.

MUHLY I’m not a big fan of gossiping about the dead, but I’m wondering if you could talk about Josquin as a kind of a competitive composer?

PHILLIPS I think he was very keen to show off when he wanted to. He was the sort of personality who needed to say, “Look, I’m better than you. I’m the greatest.” The reports say he was a difficult man, but these days I feel we’ve rather come to admire difficult, outrageously talented people.

He was compared with Heinrich Isaac, who was also a great composer of that period, but not quite as famous as Josquin. And one story has someone saying that you want to employ Isaac because he will write when you want him to — whereas Josquin will only write when he wants to, and costs twice as much.