It was certainly different from the last time that we’d seen a president speak in this setting, in February 2020, and not only because of the pandemic that swept the globe since then. When Mr. Biden took the stage, he looked out on a room holding a fraction of the usual crowd, but full of visual metaphors for the difference a year makes.

And he played off those images with a speech that both painted the country as coming back from a tough year and called for longer-term changes, in a tone of optimism. The camera showed a room half empty; his speech saw a room half-full. (OK, technically, it was about one-eighth full.)

The most obvious reminders, of course, were the lingering distancing measures in place for Covid-19, as American vaccination totals are going up and infection rates going down. The usual gantlet of glad-handing that opens State of the Union and joint-session addresses — legislators crowding the aisle for face time — was reduced. The chamber, seats taped over to enforce distancing, looked like a Broadway theater under partial reopening.

But it was also a different image from the austere, surreal tableau of distancing at Mr. Biden’s inauguration, at the pandemic’s winter nadir in America. Now, there was no marathon of handshakes, but there were fist and elbow bumps and the occasional awkward mash-up of the two. There was no packed house, but there was a little schmoozing.

Like an outdoor dinner with your vaccinated friends, it was not precisely like before, not yet, but in this transitional moment, it was something.

Beyond the face masks was the symbolism of who was wearing them — namely, a female vice president and speaker of the House on the dais behind a president for the first time in American history. 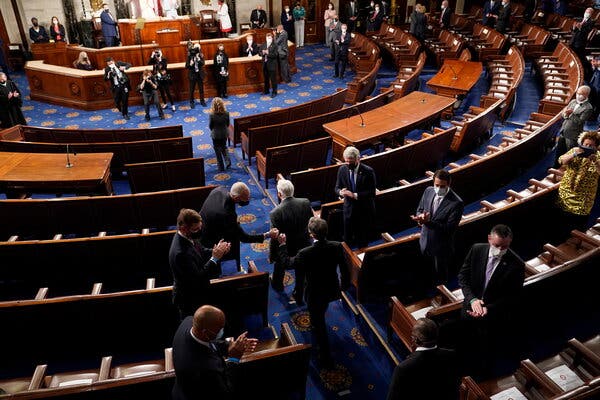 The sparse crowd was a visual reminder of the pandemic’s lingering effects.Credit…Pool photo by Doug Mills

Mr. Biden spotlighted the presence of Vice President Kamala Harris and Speaker Nancy Pelosi, another way in which the president — a white-haired white man heading a party largely dependent on the votes of women and people of color — has tried to present his election as an ensemble story. He might look like many presidents before him, his messaging suggested, but the cast was still changing.

And the quieted room, still filled with masks, still a reminder of the violent assault on it in January by a mob determined to overturn Mr. Biden’s election, created a potent backdrop to sync with his policy message — that these were extraordinary times requiring extraordinary government action.

But the intimate setting changed the speech in more direct ways, too. It was blessedly light on the stunt-casting that has become habit at these addresses — the staged moments of everyday Americans being applauded as political props or bestowed with photo-op boons. Let this, like generous work-from-home policies, be a change we keep from the pandemic.

The sparser crowd made for a strange quiet but also meant fewer momentum-breaking partisan ovations. The first lady, Jill Biden, and the second gentleman, Doug Emhoff, sat in the balcony, surrounded not by guests but by blocked-off seats.

And fewer faces in the room meant that network cameras had a smaller choice of reaction shots available. Sen. Mitt Romney, Republican of Utah, became the designated reactor for the president’s calls to tax the rich. (Sen. Ted Cruz of Texas, meanwhile, was caught with his eyes drifting shut above his mask.)

The first lady, Jill Biden, and the second gentleman, Doug Emhoff, were surrounded by blocked-off seats in the balcony.Credit…Doug Mills/The New York Times

Of course, the staging was not the only thing “just a little bit different” from last time. Mr. Biden does not like to dwell publicly on “the former guy,” as he once referred to his predecessor. But even if you weren’t sitting in the congressional chamber last night, it was hard not to notice the change in temperature. Where the former guy brought a fight, Mr. Biden brought a pep talk.

In politics, differences of style aren’t just about style; they are informed by politics and send political messages. The way Donald Trump bludgeoned the bully pulpit for four years was driven by his personality, but it was also, inextricably, geared to a base of voters who wanted to see an eternal fight against the people they hated — no pause, no rest, no truces.

As someone who was able to win an electoral victory (narrowly) with a minority of the vote, Mr. Trump’s incentive was to superserve the minority that elected him. So while he might dial down the volume and speak from the prompter in big speeches, he still stoked fears of immigrants and goaded his political enemies.

Mr. Biden’s tone may be different because he’s a different person, but he also has different political incentives. He was able to win an Electoral College margin only the size, roughly, of Mr. Trump’s in 2016, despite a clear majority of the popular vote. An electoral structure that requires him to find more votes to get the same result incentivizes him to speak to a broader voter base — one that wants, if not actual compromise and comity, then at least the sound and tone of someone giving it a shot.

Whether by design or not, the more intimate settings forced by the pandemic have suited Mr. Biden’s empathetic persona and speaking style. He has a warm, conversational pitch. He uses pauses well. He knows how to speak to a quiet room, and the current moment has given him plenty of them. (His opponents have had to account for his ability to connect. Sen. Tim Scott of South Carolina, opening the Republican rebuttal, said, “Our president seems like a good man.”)

If all goes according to Mr. Biden’s plan, he will give next year’s address to a very different room again — which is to say, the kind of packed chamber he imagined speaking to as president.

For now, he closed, “Thank you for your patience!” It was a little different from “God bless America,” but these remain different times.