JOHANNESBURG — Three years ago, amid a flurry of corruption scandals that rocked South Africa, President Cyril Ramaphosa assumed power on promises to root out graft and restore public confidence in the governing party, the African National Congress.

But over the past year, those efforts have been threatened by a brazen show of defiance from his predecessor, Jacob Zuma, who has snubbed a commission investigating graft during his tenure, refused to appear before the country’s highest court and lobbed attacks on its judges.

Mr. Ramaphosa appeared before corruption investigators himself on Wednesday to account for his party’s scandals and sought to reinforce his vision for a corruption-free A.N.C. His appearance sent a message to a disillusioned nation: No one in South Africa — even a sitting president — is above the law.

“When I was confirming that I would be appearing, I happened to be talking to one of my colleagues who is also a head of state,” Mr. Ramaphosa said in his opening statement. “His reaction was, ‘Ah, how can you do that as head of state?’ I said: ‘This is how our democracy works.’”

In televised hearings over the past three years, the commission has unearthed a web of corruption around Mr. Zuma that became endemic during his nine years in power. Under his leadership, high-ranking A.N.C. officials distributed lucrative government contracts in exchange for bribes in what became one of the most infamous chapters of South Africa’s history since apartheid ended in 1994. Corruption drained around $33 billion from state coffers during Mr. Zuma’s tenure, according to government estimates. 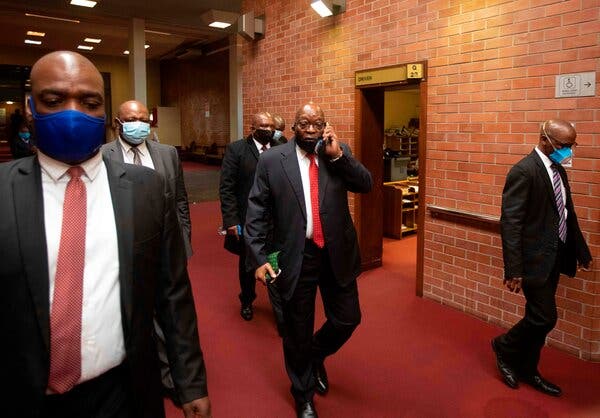 Mr. Ramaphosa’s testimony on Wednesday is the first in four days of questioning at the South African Commission on State Capture, an inquiry into the endemic graft during that period. He was called to answer questions both in his role as the current leader of the A.N.C. and as Mr. Zuma’s former deputy.

As part of its broad inquiry, the panel is investigating whether the current president was directly involved in corruption in his previous role overseeing the A.N.C.’s deployment of often unqualified loyalists to key government positions. Those appointments, according to testimony to the commission, contributed to the hollowing out of the state and led to backdoor deals that drained public funds.

His testimony comes as the inquiry prepares to deliver its final report in June and as Mr. Zuma — the center of the investigation — has staunchly resisted calls to appear before investigators.

In recent months, the former president defied a court order to appear before the commission, prompting itschief investigator to seek a two-year prison sentence for contempt of court. When the country’s top court heard that case last month, Mr. Zuma again refused to appear — a move that many saw as an open challenge to the country’s democratic institutions.

Mr. Zuma, who denies all accusations against him, has accused the corruption inquiry’s leader, Deputy Chief Justice Raymond Zondo, of harboring a personal vendetta, and has attacked the investigation itself.

“What we’ve seen the last couple of months is an attack led by Jacob Zuma on the constitutional system,” said William Gumede, the chairman of the Democracy Works Foundation, a South African nonprofit group. “This is really a moment in our country where we have to decide if we are either for constitutional democracy or we reject it fully.”

The stark contrast between Mr. Zuma’s and Mr. Ramaphosa’s willingness to engage with the commission reflects an escalating showdown within the A.N.C., Nelson Mandela’s once-celebrated movement for liberation which has governed the country since apartheid ended in 1994.

In recent years, the party has become deeply dividedbetween those loyal to Mr. Zuma — and his vision of a liberation party that stands above the law — and those who support Mr. Ramaphosa’s efforts to overhaul it.

“Both represent two different faces of the party, the democratic and the undemocratic. Both are battling for the soul of the A.N.C.,” Mr. Gumede said.

In his testimony on Wednesday, Mr. Ramaphosa offered a thinly veiled but damning condemnation of Mr. Zuma and his allies who are also under investigation for graft, which Mr. Ramaphosa, analysts and watchdog groups have said remains a problem within the party’s ranks.

Many have been emboldened by Mr. Zuma’s recent defiance in efforts to hold officials accountable. They include another top A.N.C. official, Ace Magashule, who has refused to step down from his current post despite corruption charges prosecutors recently laid against him. He denies the charges.

“The position of the A.N.C. on leaders and members who have been complicit in acts of corruption or other crimes: Their actions are a direct violation not only of the laws of the Republic, but also of the A.N.C. constitution, its values and principles,” said Mr. Ramaphosa, sitting before the commission’s chief investigator in a large wood-paneled auditorium. “Such members must face the full legal consequences of their actions.”

Still Mr. Ramaphosa treaded a fine line in his testimony between acknowledging that corruption runs rampant within the A.N.C. and defending the party policies that many say helped pave the way for that graft. Mr. Ramaphosa also refrained from naming any A.N.C. members allegedly involved in corruption scandals.

The measured responses were necessary for his political survival within the A.N.C., analysts say. But they also left many South Africans who were watching skeptical of his ability to stand up to corrupt officials within his own party.

“South Africans have wanted to see political defeat of those who allegedly committed impropriety and we haven’t seen that yet,” said Ralph Mathekga, a political analyst.“Now the cynicism is setting in.”